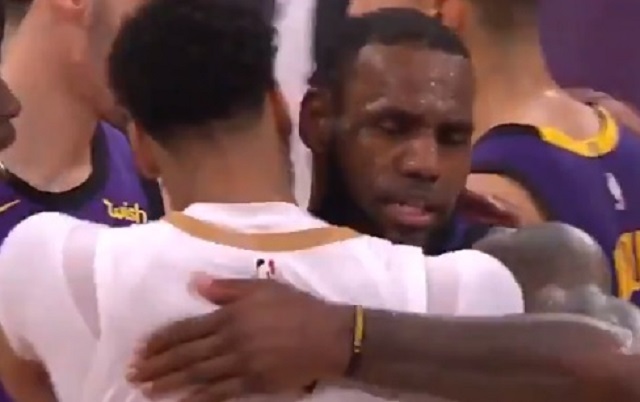 The Anthony Davis to the Lakers rumors are getting hot and heavy.

Just a few weeks ago ESPN’s Adrian Wojnarowski reported that the team was holding onto all of their young players to trade for Davis in the summer of 2019.

After the Lakers loss to the Nets on Tuesday, LeBron was asked about Davis potentially joining the Lakers and he seemed pretty excited about the idea.

Despite complaints from rival GMs about tampering, LeBron and Anthony Davis had dinner after last night’s Pelicans-Lakers game.

Some league executives reportedly believe LeBron James is tampering for answering a question from reporters, stating it “would be amazing” to play with New Orleans Pelicans superstar Anthony Davis. On Friday night after the Los Angeles Lakers defeated the Pelicans 112-104, James responded to those concerned executives, saying, “They can’t control me at all. And I play by the rules.”

And then when James exited the Staples Center, the 16-year veteran demonstrated why he’s unstoppable on and off the court.

With the Pelicans staying overnight before traveling to Sacramento, James and Davis met up for a postgame dinner in Los Angeles, league sources told Yahoo Sports.

It seems like LeBron is doing his best to recruit Davis but ultimately it’s up to the Pelicans star if he wants to play in L.A. or not.