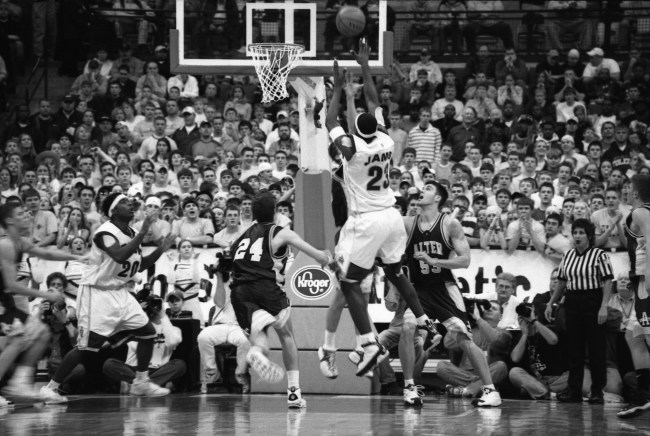 At this point, LeBron James has been a global superstar for longer than many of his fans have even been alive. He was the 1st overall pick in the 2003 NBA Draft but prior to that he was already a celebrity in high school.

LeBron James was a junior at St. Vincent-St. Mary High School in Akron, Ohio back in 2002. He averaged 30 points + 10 rebounds that season and it was the year he appeared his first Sports Illustrated magazine cover with the words ‘The Chosen One’ emblazoned across the front of the magazine. The jersey he wore on that magazine cover is now hitting the auction block.

People who get paid for their commentary on athletes often make a ton of prophetic claims about athletes and almost none of it ever comes true. This, on the other hand, was the first in-depth profile on King James and just the tip of the iceberg in his global media brand.

The ‘IRISH #23’ jersey that LeBron James wore on that magazine cover was just debuted by Goldin Auctions and bidding is open between now and October 19th. You can place your bid here but this item is expected to fetch more than $300,000.

Here’s a full description of this auction item from Goldin Auctions (link to bid here):

There was no high school basketball prospect more highly anticipated than LeBron James. By the time he was a senior at Akron’s St. Vincent-St. Mary, LeBron was averaging 30.4 points, 9.7 rebounds and 5.9 assists per game and was named Ohio Mr. Basketball. That 2002-03 high school season made LeBron James a star before his time, the most watched and wanted pre-college prospect to ever play the game.

This is the jersey that LeBron James wore when he was introduced to the sporting world at large. MeiGray has photo matched this jersey to Getty Images shots from the February 3, 2002 photo shoot at St. Vincent-St. Mary Gymnasium as well as the game later that day at James A. Rhodes Arena in Akron, Ohio. On that occasion LeBron’s St. Vincent-St. Mary Fighting Irish defeated the Archbishop Hoban Knights 74-49, with LeBron scoring 32 points with 7 rebounds. One of the photos taken that day was later used on the cover of the February 18, 2002 Sports Illustrated, LeBron’s first national exposure before being the number 1 draft pick in the 2003 NBA draft.

The gold mesh jersey has “IRISH” arched above LeBron’s number “23” in green and white. An XXL Onsports label is sewn in the lower left front tail and his number “23” is repeated on the back. The jersey shows good toning overall with some scuffing and perspiration stains as would be expected on the gamer of the NBA’s Number 1 draft pick. This jersey comes with LOAs from The MeiGray Group and Resolution Photomatching for the game use and photo match. Additionally, this jersey was given directly by LeBron James to our consignor and his family and was worn by LeBron for the majority of his junior season. A detailed letter from our consignor who attended St. Vincent-St. Mary’s will accompany the jersey.

I’m 100% certain that H2 Hummer will sell for more than $35,000 as there are zero bids on it so far and the auctions just began but if you’re in the market for a custom Hummer than check that out!