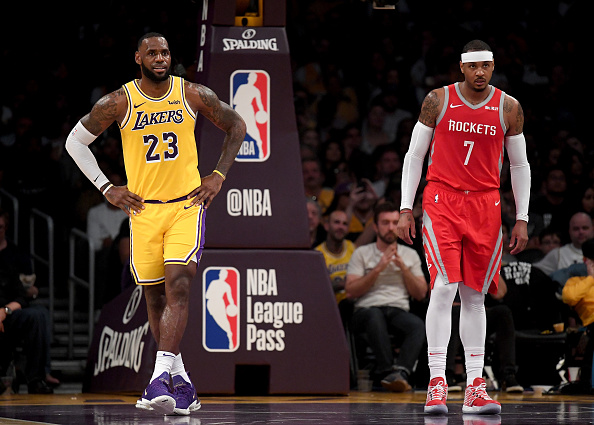 It looks LeBron James wants to get his buddy Carmelo Anthony on the Lakers.
bu
According to a report from Joe Vardon of The Athletic, LeBron wants the team to sign Melo this season.

“LeBron James would like to get Carmelo Anthony to Los Angeles with him on the Lakers, a league source told The Athletic.

Anthony, 34, is estranged from the Houston Rockets – still on their payroll for the league-minimum $2.4 million but gone from the team after the two sides decided he was not a fit after just 10 games. He can’t be traded until at least Dec. 15, and sources said there had been no request made by James to Lakers president Magic Johnson or general manager Rob Pelinka to make a deal for his friend. Nor would there be.”

Lakers fans on Twitter are clearly against the move.

*reads that lebron wants melo on the lakers* pic.twitter.com/Un8RDB49DF

It's unwise to question LeBron about almost anything basketball-related but he also was high on Wade joining him in Cleveland and that lasted all of 5 months. I want so bad to believe in Melo still but Wade is the more effective player right now so I can't imagine this ends well. https://t.co/ndKX1yDbME

When you hear Lebron is interested in Melo joining the Lakers pic.twitter.com/9eX21Skn7r

Lakers fans when they hear the rumor LeBron wants Melo on the team pic.twitter.com/bb7KOIWJUU

My reaction when I got the @BleacherReport notification that LeBron wants Melo on the Lakers…@WorldWideWob pic.twitter.com/0Y4yjgzwHF

I don’t even see a way Melo could fit in the rotation? Like where would he play?

Midrange is dead and it's taking Melo with ithttps://t.co/h2q952ozt4 pic.twitter.com/IKoq0NPHtH