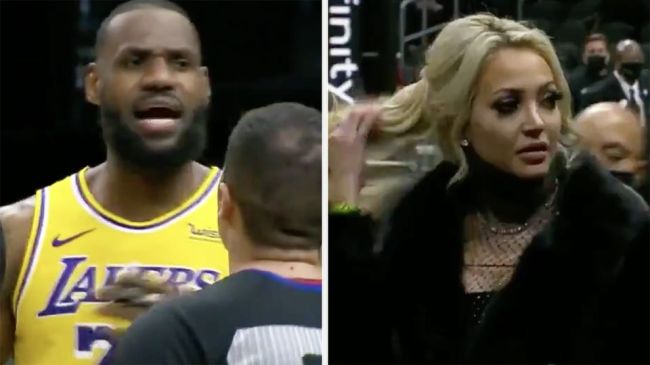 The NBA now has their very own “Karen”.

On Monday night, a woman got kicked out of the Hawks-Lakers game for getting into a heated verbal confrontation with LeBron while sitting courtside.

The referees stopped the game after LeBron was heckled by a spectator in Atlanta. pic.twitter.com/apoDqvt4ll

After the game, the woman took to Instagram and claimed she got kicked out for telling LeBron “I’m going to fuck up” after LeBron apparently cursed out her husband.

Hawks Karen is still going at LeBron on Instagram “Excuse my I have courtside seats that I pay for, fuck you LeBron you’re a fucking pussy”

LeBron apparently thought the entire incident was funny and dubbed the woman “courtside Karen” on Twitter.

Before the tweet, LeBron spoke to the media and said he didn’t believe she should have gotten kicked out over some heated trash talk.

LeBron James on what happened courtside with the fan pic.twitter.com/S1kQdsCsbq

“I don’t feel like it was warranted to be kicked out,” h