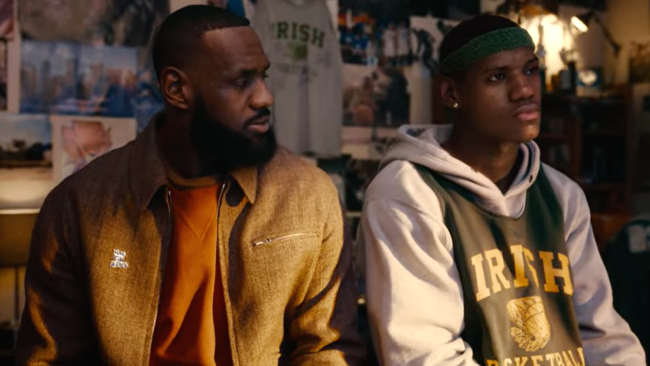 If the goal of cryptocurrency companies was to make viewers of Super Bowl LVI scratch their heads in confusion after watching their very expensive commercials on Sunday then mission accomplished.

In addition to Coinbase’s very The Office inspired ad with a QR code bouncing around a blank screen, there was a Crypto.com ad with LeBron James and … a another, younger LeBron James.

Somehow, in the ad, the LeBron James of today was able to travel back in time to the year 2003 and talk to a younger version of himself. How he did this goes unexplained.

It’s quite a concept.

During his conversation with current day LeBron Jamesin his bedroom of 2003, teenage phenom LeBron learns about things from the future like cordless headphones, watching movies through your phone and electric cars.

When 2003 LeBron asks 2022 LeBron James talk about the hype surrounding the teen and if he’s ready to play in the NBA, current LeBron tells him, “I can’t tell you everything, but if you want to make history you got to call your own shots.”

LeBron James’ Super Bowl commercial was turned into an A+ meme

NBA fans on social media, however, came up with a whole list of things current day LeBron James should have been telling 2003 LeBron James. You know, since he is from the future and all that. The list includes some advice about how he should deal with various players in the NBA once he gets there.

“If Russell Westbrook ever calls you, hang up” pic.twitter.com/CQVGuUXgeq

"and don’t forget to remind JR Smith of the score when you’re in the NBA finals" pic.twitter.com/gMFEP3g7LV

“Do whatever you can to keep Alex Caruso” pic.twitter.com/p0O8BKzVuL

NBA fans also had some advice on how to NOT handle his first free agency decision.

He also told younger LeBron a few other things about his future and answered a few other questions.

“You’re gonna win a ring at Disney world and you will forever be known as LeMickey” pic.twitter.com/FkTmPfJtDG

“When do I get my new hairline? I hate this headband.” pic.twitter.com/qYNkrkrXDr

Fans were just full of suggestions, some better than others.

Should have warned his young self about Kyrie 😂

If you want to make history, practice free throws

If he could go back to 2003, should tell Kobe to stay away from helicopters. Not even joking. Trying to avoid tragedy