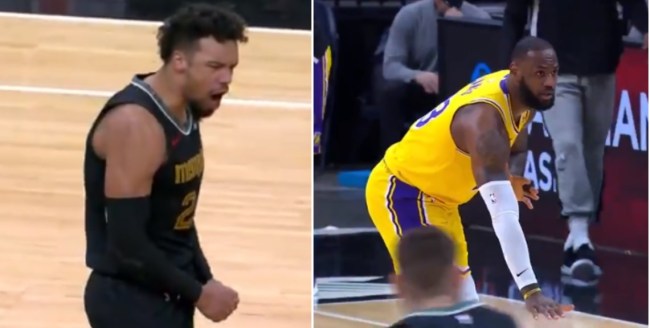 Memphis Grizzlies forward Dillon Brooks thought it was a good idea to talk trash to one of the greatest basketball players of all-time, and it ended up backfiring horribly for him.

Early on during Tuesday night’s Grizzlies-Lakers game, Brooks flexed on LeBron after overpowering the Lakers superstar under the basket.

Unfortunately for Brooks, LeBron ended up hitting a clutch fadeaway shot over him with about a minute left to go in the game.

Under 1 minute on NBA TV pic.twitter.com/jsVTsQeFg3

While celebrating the shot LeBron disrespectfully mocked Brooks for being too small to guard him.

Not LeBron saying Dillion Brooks was too small 😭😭😭 pic.twitter.com/PaYmRAvQZg

When will they learn 😂#LakeShow pic.twitter.com/edYJw6oFac