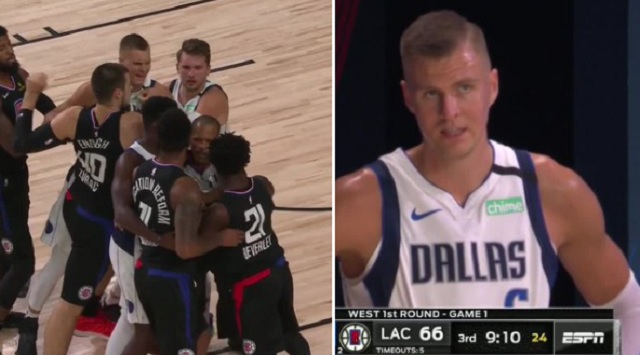 NBA fans were not happy with the officiating during the Clippers-Mavs playoff game.

During the third quarter of game 1, Kristaps Porzingis was ejected for getting his second technical foul after he got into a shoving match with Marcus Morris.

Porzingis had gotten a tech earlier in the game for complaining to referees about a foul call.

lol at Porzingis getting two techs and ejected pic.twitter.com/149f6sDcLD

NBA fans including LeBron James and Dirk Nowitzki weren’t happy with the second technical foul call and blasted the refs.

That ejection is super soft…

The NBA: Our Ratings are down, what do we do?

I hope the NBA sends a memo to these refs to remind them that guys have to do something truly egregious to get elected from emotionally-charged playoff games. Dudes shouldn't get T'd up for hollering "BS!" Kristap Porzingis shouldn't have been tossed for a passionate reaction

NBA refs the worst in sports

Society if the NBA had good refs: pic.twitter.com/RMYhMnAJ4h