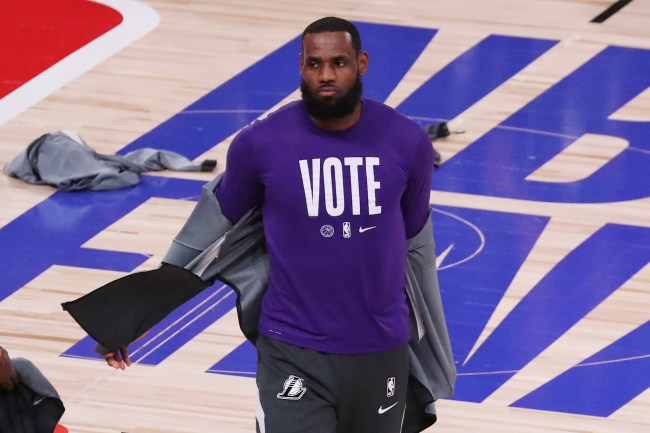 LeBron James has finally broken his silence on whom he’s endorsing for the President hours after getting mocked by President.

On Monday afternoon during a campaign rally in Pennsylvania, Donald Trump told his supporters that he felt bad for LeBron after the NBA received record-low ratings during the NBA finals.

Hours after Trump’s rally LeBron took to Instagram to post a picture of Kamala Harris and Joe Biden with the caption “One more day. Please 🗳!! We need EVERYTHING to change and it all starts tomorrow.”

Back in August while speaking to Yahoo Sports’ Chris B. Haynes LeBron didn’t officially endorse Biden and Harris when asked but hinted strongly for who he was voting for.

James had stopped short of officially endorsing Biden and Harris in the past, but his support of their candidacy was never in question.

Yahoo Sports’ Chris Haynes asked James if he’d be endorsing their ticket in August while inside the NBA bubble at Walt Disney World, and James just laughed.

“I mean, what’s known don’t even need to be said,” he replied.

LeBron James says urging people – particularly African Americans – to go to the polls is not about swaying them to a candidate. I asked who he’s endorsing for President of the United States in the upcoming election. @NBAonTNT pic.twitter.com/I4WLihehjU