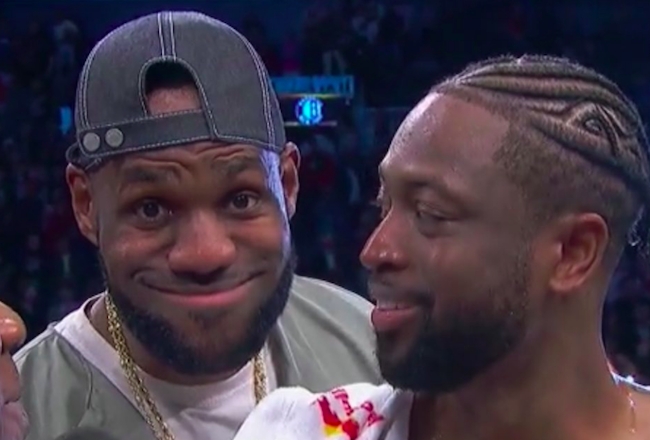 After an impressive 16-season career in the NBA, Dwyane Wade finally decided it was time to call it quits this year. Following a long farewell tour, reality started to set in earlier this week when he played his final home game and the tribute videos started to trickle in.

Last night, D-Wade traveled to Brooklyn for his final NBA game, where he had plenty of people in his corner based on the deafening “Paul Pierce Sucks!” chant that could be heard at Barclays Center.

However, there was one particularly noteworthy group of fans who made the trek to cheer him on: LeBron James, Chris Paul, and Carmelo Anthony, a.k.a. three of the four members of the legendary “Banana Boat Crew.”

It’s safe to say Wade had a fitting end to his career, as he managed to rack up a triple-double before the end of the third quarter and finished with 25 points to help the Heat prevail over the Nets.

Wade got a chance to reflect on things after the game but lost his train of thought after a certain someone got nostalgic and decided to crash the interview.

The more things change, the more they stay the same.

Lebron look just like his puppet in them throw back Kobe and lebron commercials https://t.co/6ksG3NDqR1

LeBron when all y’all said that he could take the Lakers to the WCF: pic.twitter.com/Qu4W5e7Ueg

@TylerIAm Lebron looks like the single friend who asks you to hype him up at the bar to women and proceeds to completely black out pic.twitter.com/wl2HLkyJ2W

looks like lebron’s about to pull the classic ‘smile wide to reveal orange slice in place of teeth’ trick https://t.co/DNxFYuF2Uj

Lebron look like the broke friend tryna get a free drink at the bar courtesy of his friend. https://t.co/4UZJUrSY7I

Why does LeBron look like he’ll wash DWade’s windows for $5? pic.twitter.com/r4eqXM3mQM

As you can see, plenty of people—including Wade—found the videobomb pretty amusing but there was at least one person who was decidedly not a fan: the one, the only, the insufferable Skip Bayless.

It was just like LeBron to photobomb DWade's final Heat Network TV interview with a big goofy grin. No, LeBron, tonight for once isn't about you. It's about HIM.

Who called the fun police?