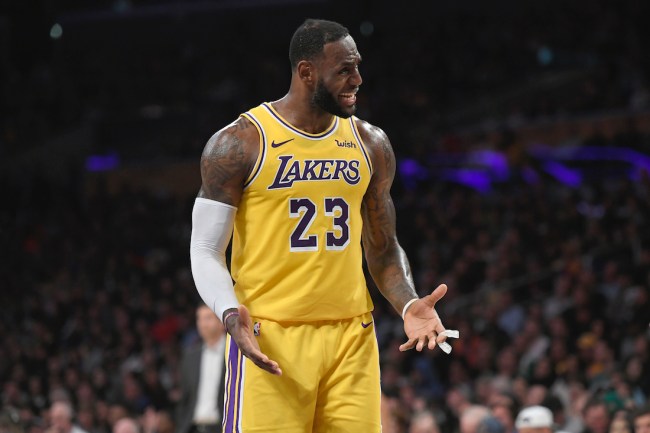 The LeBron James injury has currently derailed any hope for the Los Angeles Lakers to repeat as NBA champions this season. Sure, the Western Conference team would still make the playoffs if the season ended today, but it’d be byway of the play-in game — something that James has slammed recently. That’s quite the fall from grace following last season’s magical run in the NBA Bubble.

Making matters worse for the Lakers is this: They just keep getting banged up, with the team’s other superstar, Anthony Davis, forced to leave Thursday’s game after experiencing what the team’s calling back spasms. Without James and Davis, the Purple & Gold are all but dead in the water, and will be lucky to even stay afloat to reach the postseason by the time the season ends in a week or so.

But even if Davis returns quickly, could the LeBron James injury linger long enough to cost the Lakers chances of making a deep run this season and beyond? James seems to think so, with the four-time champ recently saying that he’ll never be 100 percent again following the ankle injury. At 36 years old, could this be Father’s Time creeping up on the seemingly indestructible James? Possibly.

Regardless of whether that happens or not, ESPN analyst Jay Williams has a major problem with LeBron making such a proclamation. In fact, the former NBA player went on his show on Friday and slammed James for doing so, adding an extra little dig by saying Michael Jordan would never say such a thing. Take a look below at the impassioned opinion for Williams.

“As a guy who played for the [Chicago] Bulls, who has watched Michael Jordan for a long time, I’ve never heard MJ say something like that,” Williams said. “MJ just wouldn’t say anything.”

“I’ve never heard MJ say something like that…MJ just wouldn’t say anything at all.”
@RealJayWilliams doesn’t like that LeBron James said he will never be 100% healthy again pic.twitter.com/4eLvnxH1Zm

While Jay Williams slams LeBron James here, he did express his respect for the Lakers star playing as much as he could this season despite the shorter offseason following last year’s championship. The ESPN analyst also insists he thinks James is the greatest player ever — so it’s curious as to why Williams even brings up the MJ comparison.

That said, it’s a valid point, and further speaks to how competitive Jordan was. That’s not to say James isn’t at that level, but, per Williams, this latest comment from LeBron regarding his health might sound like an excuse.

We’ve all learned over time to never doubt LeBron James, so maybe these latest comments only inspire him to get back faster and perform at the highest level. Whether that happens this season or next is still to be determined, though.