LeBron James Gets Called A Hypocrite By Fans, Gets Ripped By Stephen A Smith Over Criticism Of Play-In Tournament 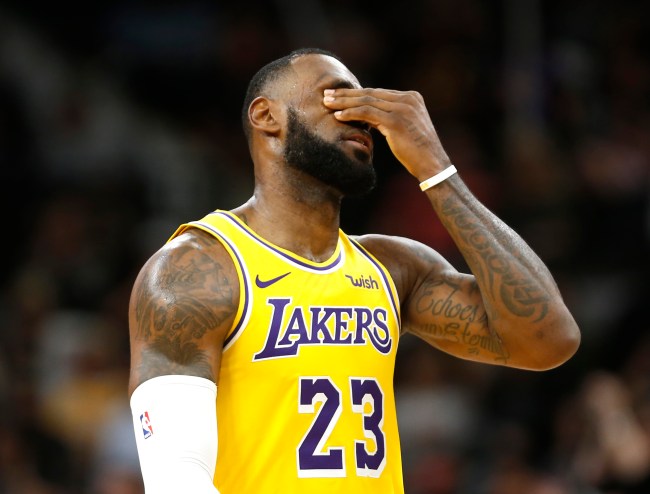 LeBron James is not happy the Lakers may be forced to participate in the NBA’s play-in tournament that pits teams between the 7th-10th seeds for the last two playoff spots.

After the Lakers latest loss to the Raptors that put them in the seventh seed in the Western Conference, LeBron blasted the play-in tournament and said he believed whoever came up with format should be fired.

LeBron James on the play-in tournament: "Whoever came up with that s— needs to be fired"

LeBron on the NBA Play-In Tournament: "Whatever the case may be or we end up in the Playoff whatever that things is. Whoever came up with that s**t needs to be fired. But whatever." pic.twitter.com/lwRReGAQQ8

On Monday’s edition of First Take, ESPN’s Stephen Smith ripped LeBron for being afraid of playing in the play-in tournament.

“Here’s what I will say that makes LeBron not look so good,”. “You weren’t saying this when y’all were a top-2 seed. You’re saying it now because you find yourself having to compete to avoid bubble play.”

“I think it’s great that LeBron had that reaction,” Smith’s First Take co-host Max Kellerman surprisingly countered. “He’s making the NBA look great because what it shows you is even the best player in the world is biting his fingernails right now. He’s thinking, this league has got me under pressure.”

Fans also noted LeBron was being hypocritical considering he pushed for a play-in tournament last year before the bubble.

LeBron in late March, 2020: "You got Portland. You got Memphis…New Orleans and Sacramento tinkering around there…so if there's five or ten games left…why not those guys battle it out? Make them play each other all five games?" https://t.co/y9tbcBsNow

LeBron James last night on the play-in tournament: “Whoever came up with that sh*t needs to be fired"

LeBron James is a joke. Wasn’t a problem last year when his team was a top seed. Only a problem now because his team may be in the play-in. U lose credibility with the lack of consistency. #Hypocrite https://t.co/lnUmdBe7EG

It’ll be interesting to see if LeBron will use his influence to try to end the play-in tournament after this season.