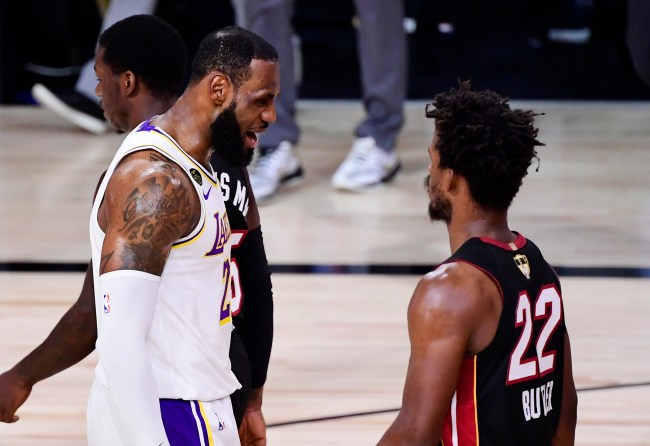 The NBA Finals are starting to heat up and LeBron James doesn’t want to get into a back-and-forth war of words with Jimmy Butler.

During Sunday’s game 3 Butler told LeBron “You’re in trouble” in the 4th quarter after scoring.

According to Butler, he was just repeating the same phrase LeBron had told him earlier in the game.

Jimmy Butler says that LeBron said to him at the end of the 1st quarter that “you’re in trouble.” So Jimmy says he just repeated it to LeBron in the 4th.

Jimmy says LeBron told him "you're in trouble" in the first quarter.

He responded by saying the same thing in the fourth 😅 pic.twitter.com/sfJvrgR2AJ

LeBron makes clear he's not a trash talk initiator, amid the LeBron/Butler meaningless thing last night: "The way I play the game is enough trash-talking itself," LeBron said. Great respect between LeBron, Butler.

“I’ve always been a guy who kind of let his game do the talking,” . “But when guys get to talking, I can do that as well. I’ve always tried to let my game do the talking. Some guys like to talk their way through the basketball game. I think it helps them out, personally. There’s always communication going on on the floor. For me, personally, as long as it doesn’t get disrespectful, I’m fine with it. But I’ve never really started up a trash-talking dialogue. That’s just not me. I believe the way I play the game is enough trash-talking in itself.””

The NBA finals could get real interesting if the Lakers lose game 4 on Tuesday.