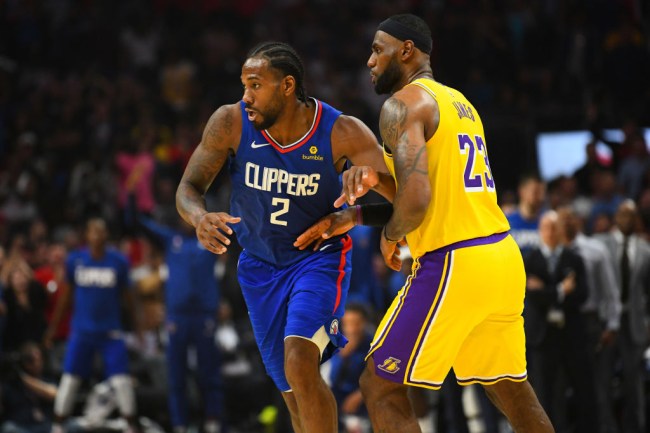 A number of highly sought-after free agents became available at the end of the previous NBA season, with Kevin Durant, Kyrie Irving, and Kawhi Leonard all hitting the market at the same time.

The first two names on that list would decide to join forces in Brooklyn (although they’ll have to wait for Durant to recover from injury before putting their potential to the test) and Leonard would sign with the Clippers, who would also add Paul George to their roster.

There was plenty of speculation that Leonard would end up in Los Angeles when everything was said and done but no one knew exactly which team in the city would be able to lure him in, as the Lakers were also contenders before being forced to “settle” for Anthony Davis.

LeBron James did what he could to court Leonard, as he reportedly met with him during the playoffs to discuss the topic and stayed in contact with the former Raptor as free agency played out to no avail.

On Tuesday, the duo faced off against each other on the inaugural night of this year’s season, where the Clippers would ultimately prevail by a score of 112-102.

Before the game, a reporter had the chance to ask LeBron about why he thought Leonard decided to play for the Lakers’ crosstown rivals and to say he had an amusing response would be an understatement.

Reporter: What do you think swayed the decision for [Kawhi]?