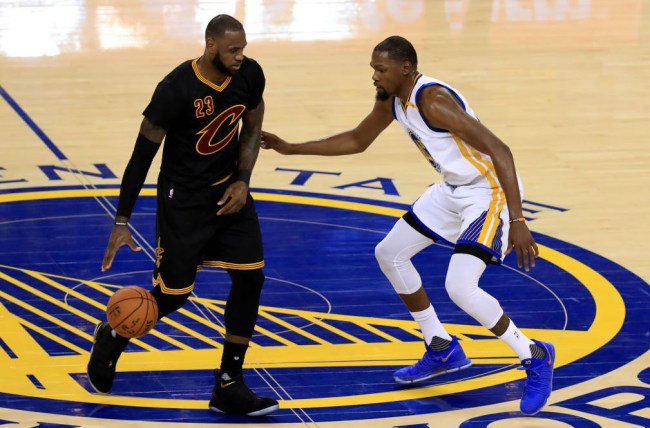 Hip-hop might have its origins in the 1970s but I’d argue it didn’t really blow up until the early 1990s, which was basically rap’s golden age.

1993 was a banner year for the genre, giving the world chart-toppers like “Insane in the Membrane” and
“Nuthin’ But A G Thang” in addition to another game-changing track: Shaquille O’Neal’s “Outstanding.”

Shaq was the first big name in the NBA to step into the studio and paved the way for other players who would follow in his giant footsteps, like Kobe Bryant, who also dipped his toes into the rap game.

We can’t forget Allen Iverson, who paid homage to Philly by doing what would appear to be his best Will Smith impression (with just a little bit of Mase sprinkled in).

The Artist Formerly Known as Ron Artest also got into the game and even convinced some real. actual rappers to appear on a song with him.

Last year, ESPN reported Kevin Durant and LeBron James decided to kill some time during the NBA lockout back in 2011 and hopped into the booth to record a song together but the outlet couldn’t actually manage to track the record down.

It immediately became my NBA hip-hop white whale, and while a short clip eventually surfaced, it only left me wanting more.

Thankfully, the long wait is finally over.

According to Sports Illustrated, a full version of “It Ain’t Easy” has finally surfaced seven years after it was first recorded in Cleveland.

It’s not exactly a banger and the lyrics aren’t something you’d find on a Kendrick Lamar album but I’m honestly pretty impressed by Durant’s flow.

As for LeBron, well…

One final note: I could be wrong, but I’m pretty sure the sample was taken from the song that plays in the background during Al Pacino’s iconic halftime speech in Any Given Sunday, which is a pretty dope flip.

If you excuse me, I have to go try to fix the wall I just unconciously ran through after watching that video.