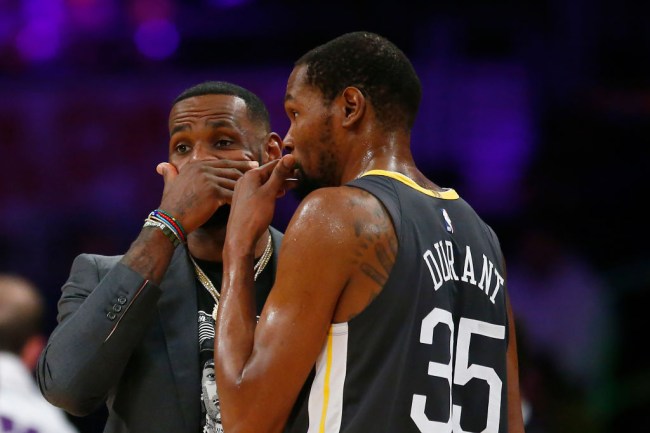 Last night, the Lakers and the Warriors played a pretty meaningless game, as Golden State has basically secured the top spot in the Western Conference and Los Angeles, well… we’re not going to talk about Los Angeles.

Just kidding. We totally are.

The Lakers came into the season with clear eyes and full hearts but that wasn’t enough to stop them from losing 44 games so far despite the best efforts of LeBron James, who has been battling a groin injury since Christmas and didn’t have the good sense to shut things down until his team was out of the running for a lottery pick.

LeBron was on the sidelines last night, and during a break in the action, he decided to chat with Kevin Durant—a decision that immediately set the internet ablaze once the footage started to circulate.

People tried their darndest to figure out what they were talking about, and while I don’t know if any of these guesses are right, they managed to tickle my fancy.

LeBron James: KD you got to come play with me please;)?

Let’s just put our hands over our mouths and act like we’re telling secrets.

LeBron: "You know this is about to become a meme, right?"
KD: "Some hoopers make millions, other hoopers make memes. We on a money & meme routine…" pic.twitter.com/FOlR9TudvM

LBJ "My breath doesn't stink does it?"

If you ask me, LeBron was probably just trying to get KD to make an appearance in Space Jam 2. It seems like he can use all the help he can get right now.