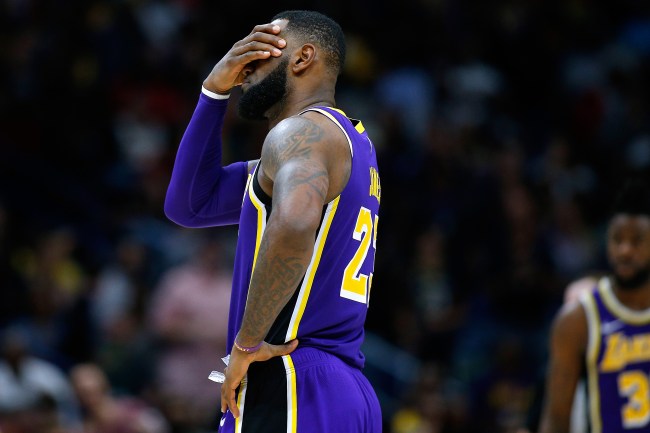 Last night the LA Lakers suffered a brutal 13 point loss to the New Orleans Pelicans who were without star big man Anthony Davis.

After the game, LeBron James was not happy with the team’s lack of urgency and experience considering the team is on the brinK of missing the playoffs.

After losing to the Pelicans, LeBron questioned the Lakers' sense of urgency. pic.twitter.com/T9L9VkTuah

“How many know what’s at stake if you’ve never been there?” James asked Saturday after L.A. went down by as many as 20 points to a Pelicans team that was resting Davis and came into the night eight games under .500.

I’m playing devil’s advocate, you know? It’s kind of a fine line when you talk about that, because when you’ve never been there or know what it takes to actually shoot for something like that, sometimes you’re afraid to get uncomfortable.

“So you got to be comfortable with being uncomfortable. So I’m not saying that’s what we are as a whole. It kind of looks that way at times, that sometimes we’re afraid to be uncomfortable and kind of get out of our comfort zone and kind of, you know, have that sense of urgency from the jump, and not be afraid to actually go out and fail to succeed. So I mean, we have, what — 23 games left? We’ll see what happens.”

LeBron after the Lakers latest loss.

Lakers fans did not seem to appreciate LeBron publicly questioning his teammates in front of the media.

LeBron is a terrible teammate https://t.co/pMQENt8MzI

Lebron wilding 🤦🏾‍♂️ he ain’t never said no shit like this https://t.co/DKYxfcjM2Y

LeBron James calls out his teammates. You can only do this when you aren't taking plays off on defense yourself. Jordan and Kobe didn't do this. No help defensive rotation, players going by the team shooting layups. Anthony Davis sits out and you give up 128pts. Wow!

LeBron is such a fraud and a terrible teammate. Calls out his teammates constantly for their effort when he is making little effort himself, especially on the defensive end. Kuzma keeps taking veiled shots about effort that seem aimed at LeBron.