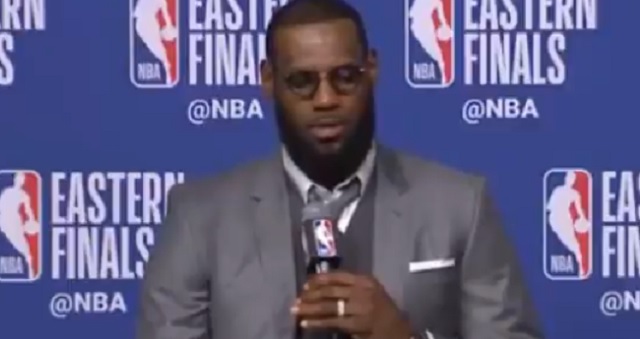 LeBron James is a basketball genius and has the ability to recall entire series of plays at a moments notice. After the Cavs’ 108-83 loss to the Celtics in Sunday’s Game 1 of the Eastern Conference Finals, LeBron was asked what went wrong from the Cavs at the start of the fourth quarter and LeBron gave an exact play by play breakdown of what happened on the court.

“What happened? The first possession we ran them down all the way to two on the shot clock. Marcus Morris missed a jump shot, followed it up — they got a dunk. We came back down, we ran a set for Jordan Crawford — I mean, Jordan Clarkson — and he came off and missed it, and they rebounded it.

“We came back on the defensive end and we got a stop. They took it out on the sideline. Jayson Tatum took the ball out, threw it to Marcus Smart in the short corner — he made a 3. We come back down, miss another shot. And then, um, Tatum came down and went 94 feet, did a Euro step and made a right-handed layup. Timeout. There you go.”

We went back and checked if LeBron had recalled things correctly and of course he did.

Yoooooo LeBron's memory is on point….Dude is a basketball genius WTF? pic.twitter.com/4RAZlECXzt

LeBron is just on another level IQ wise and is destined to become a coach one day.