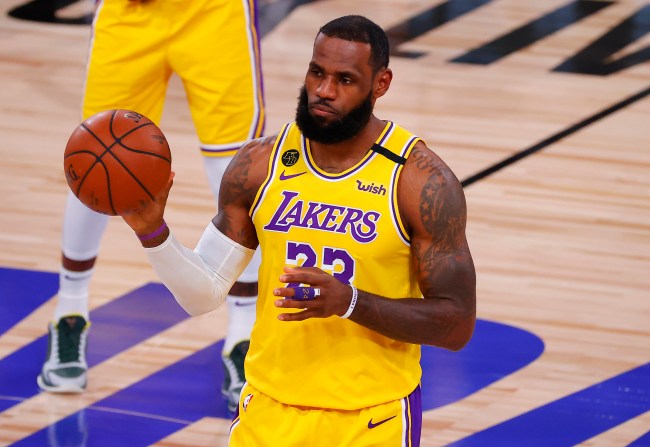 The LA Lakers blew out the Miami Heat in game 1 of the NBA finals 116-98 on Wednesday night but LeBron James wasn’t completely satisfied with his team’s performance.

Immediately after the game while on his way to the locker room, LeBron admitted that he was not happy with how the team ended the game.

“I liked the way we played in that second, third quarter. But the way we ended, that’s unacceptable.” – @KingJames pic.twitter.com/VEhhGFFkgW

Apparently LeBron was not happy with the way some of his teammates acted down the stretch of the game.

Via Chris B. Haynes of Yahoo Sports

Davis, Howard and some players on the Lakers’ bench began making the glasses gesture again as they walked to their bench. James didn’t let this celebratory occurrence slide this time.

“Hey, hey! Stop it! Stay locked in!” he shouted at his teammates before entering the huddle. “This s— ain’t over, man.”

The Lakers easily finished their mission in Game 1. Before the final buzzer sounded, James walked over to each of his teammates and congratulated them on striking first, but also reminding them that they need three more wins.

During his postgame press conference LeBron reiterated that he wasn’t satisfied with winning just one game in the series because the “job’s not done.”

LeBron: "We've got so much more work to do. The job is not done. We're not satisfied winning just one game."

"Job is not done. We're not satisfied with winning one game."

The Lakers are just three wins away from winning the championship and it seems like LeBron is extremely focused on the task at hand.