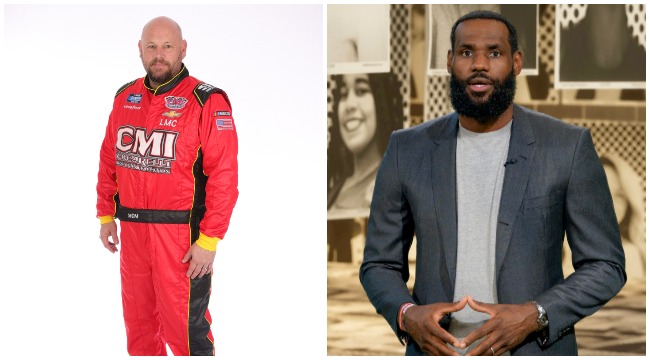 Last week, NASCAR announced in a statement that “the display of the confederate flag will be prohibited from all NASCAR events and properties.”

In the wake of the announcement, Ray Ciccarelli, who competes part-time in the NASCAR Gander RV & Outdoors Truck Series, decided that he could no longer compete for an employer who is “fucking one group to cater to another” and will be quitting forever after the 2020 racing season is over.

#NASCAR Truck driver/owner Ray Ciccarelli says he won’t continue in NASCAR after this year. He cited his reasons in this Facebook post: pic.twitter.com/NKrgPZFvyJ

The 50-year-old, who had just one top-10 finish in 18 races over his career, gave an interview to TobyChristie.com after being mocked relentless online, saying his words were “misconstrued” and have resulted in threats against him and his family.

“My wife, my family have been attacked and abused on social media. It’s just heartbreaking.”

“In no way shape or form was I defending the Confederate flag,” he said. “Everything I was saying was the fact that I understand both sides’ feelings toward the flag.”
“My viewpoint, all I was trying to say is how do you take [the flag] from one group and help support the group that it offends and then what do you do to the group that you took it from? Now, they get outraged.”

James reposted a photo of Ciccarelli in an Instagram story, covered his face with a clown sticker, and wrote, “Bye Bye!! I can probably say they won’t miss you.” 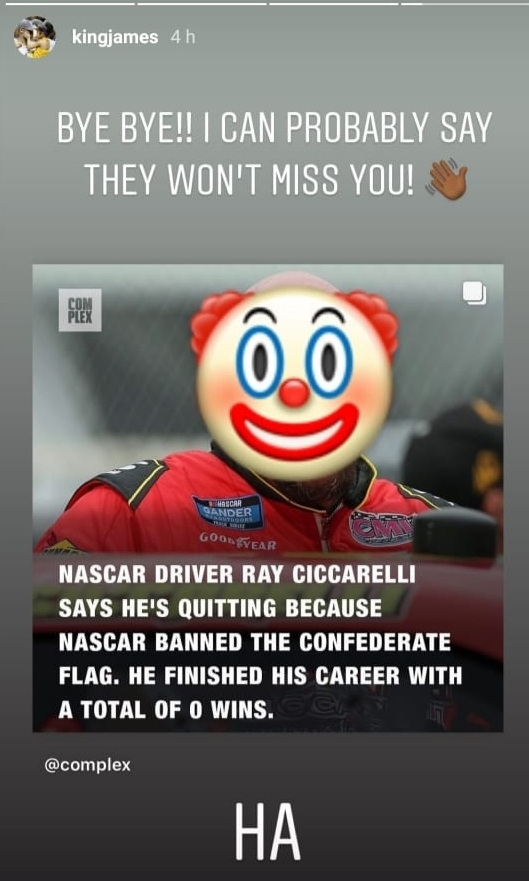 Ciccarelli said he hoped the clarification of his comments would eliminate some of the hate he’s received, claiming, “This was a very educational learning experience.” Can’t imagine LeBron mocking him to his 66 million Instagram followers will help his cause.

LeBron heaped praise on Bubba Wallace, the only full-time black driver in the Cup Series, who not only called for the removal of the confederate flag in an appearance on CNN on Monday, but raced in a car Wednesday that was painted black and had the words “#blacklivesmatter” written on it as well as “compassion, love, understanding.”