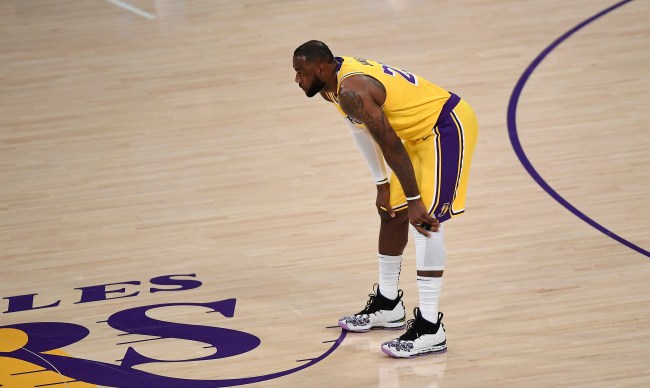 New story: The Lakers were notified by the NBA that LeBron James violated protocols by attending an event for his tequila brand earlier this week, a league spokesman told ESPN https://t.co/gBs8fZBfJo

On Monday night, before the Lakers’ play-in game against the Golden State Warriors, James attended an event in the LA area to promote his tequila brand Lobos 1707.

Despite the fact that all guests including celebrities like Drake and actor Michael B. Jordan had to produce proof of vaccination or a recent negative test result in order to attend, the NBA says LeBron broke protocol.

It’s a violation of the agreed upon protocols, and, as we have in other comparable instances around the league, it has been addressed with the team,” a league spokesman told ESPN on Friday.

LeBron was recently non-committal when asked if he had taken the vaccine that would have allowed him to attend the party under the NBA’s current health and safety protocols.

LeBron won't confirm or deny that he got the COVID vaccine: "It's not a big deal."

Here is a transcript of what LeBron did (and didn't) say to @kylegoon when asked about the COVID-19 vaccine and his thoughts on it: pic.twitter.com/97BjFpa8M8

“Anything I do off the floor is predicated to my family for the majority or 99.9 percent of that,” James said. “It’s about the health and safety of my family. That’s what it came down to. Being available to my teammates on the floor is about taking care of my body and me doing everything I can to make sure I’m available both mentally, physically and spiritually as well. But anything of that nature is all family talk.”

The NBA’s spokesman mentioned to ESPN that LeBron’s breach of the health and safety protocols was “addressed with the team” but it’s currently unclear if Lakers superstar will be punished in any way due to the violation.

The Lakers are currently set to play game 1 of their playoff series against the Suns on Sunday.