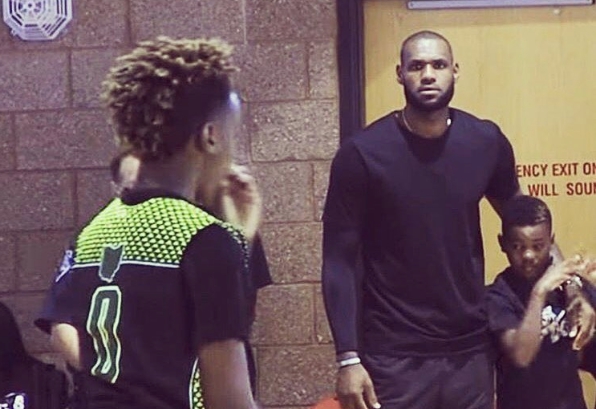 While Kyrie and the enemy were ruthlessly mocking LeBron James at Harrison Barnes’ wedding, the four-time NBA MVP was in Las Vegas working out with Derrick Rose and Eric Bledsoe and trying his hand at coaching his 12-year-old son’s AAU game.

LeBron James Jr.’s North Coast Blue Chips squad was bested by the Oakland Soldiers 54-51 in a game that LeBron embraced the role of overbearing dad-coach. In the clip at the bottom of this post, you can see how much Bron was flexing his “I’m The Best Player In The World” muscle to steal a few questionable calls from the star-struck referees.

But a funnier storyline was the gripe LeBron had with a member of the opposing team. A kid on the other team was allegedly burning Bronny Jr.’s team so badly, they questioned his age. Check out the tweets below.

My lil bro was killin so much…Lebron thought he was older than what he was. Lol nope we've just been #inthelab pic.twitter.com/RTy0w6PgOv

I never thought I’d say this but poor LeBron. The dude has his soldier go full Benedict Arnold on him and now he’s calling to see a young teenager’s birth certificate after an AAU loss.

For the record…doing my hw on Lil bronnie….I think he's good. Such an unselfish player…seems like he sees the floor like pops