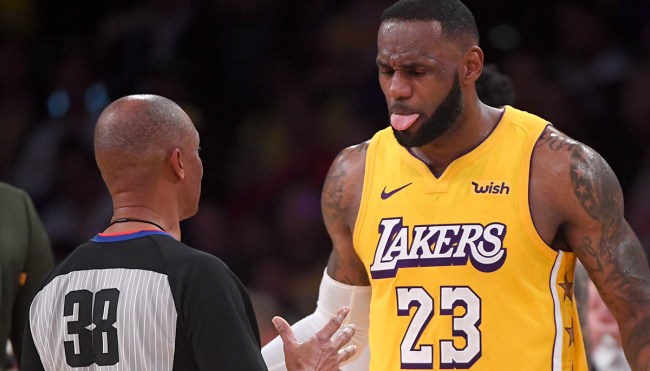 You don’t need to be a basketball scholar to know the biggest names in the NBA have historically been on the receiving end of some preferential treatment from the league’s referees, as star players frequently receive the benefit of the doubt on both ends of the court.

For the most part, this favoritism is manifested in fairly subtle ways. If a superstar is playing defense, they might not be called for a foul that would send them to the line every single time, and the threshold for receiving a technical while voicing one’s displeasure over a particular development tends to be a bit higher for the guys the NBA relies on to sell tickets and boost ratings.

LeBron James has been one of the biggest beneficiaries of biased officiating, and it’s hard to think of a single moment that highlights that reality better than what occurred when the Lakers faced off against the Bulls on Sunday.

During the second quarter, James attempted to connect with Carmelo Anthony by throwing a bounce pass that ultimately ended up out of bounds. While it appeared to be a fairly obvious turnover, LeBron stormed across the court to confront multiple refs over the call, which was inexplicably overturned after the officials ruled it had been kicked by Lonzo Ball.

The ball did make contact with a player’s foot, but because the player in question was Russell Westbrook, it shouldn’t have been a factor. However, because Ball was determined to be the guilty party, the Lakers not only retained possession but had a dwindling shot clock reset to 14 seconds.

As you can imagine, NBA fans were not shy about voicing their displeasure.

Lebron making referees overturn correct calls in front of your eyes & yet y’all don’t think Adam Silver & the refs help him make the Finals & win chips. We all witnessed the suspension of the 16 FMVP and the foul trouble/ejection of the 16 league MVP in back to back games.

Lebron just threw the ball out of bounds, threw a tantrum, then they called it a kick off Lonzo when it was nowhere near his foot. Man 🤣

By now, it shouldn’t come as too much of a shock, but that doesn’t make it any less frustrating.