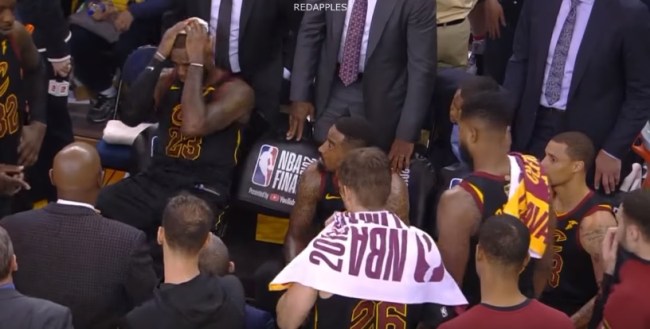 The Cleveland Cavaliers got swept in the NBA finals after a disappointing showing from LeBron James. who scored 23 points off of 7-13 shooting in game 4. After the game, ESPN’s Brian Widnhorst dropped a bomb when he revealed that LeBron James was playing with a severe hand injury he suffered after punching a black board following JR Smith’s game 1 blunder that cost them the game.

LeBron James has been playing the last three games with a serious right hand injury that he suffered after punching a blackboard in the locker room in Golden State after game 1.

LeBron admitted to breaking his hand after letting his emotions get to him after game 1.

Self-inflicted. Post-game, after Game 1. Very emotional… the way we played, the calls that were made, I had emotions that the game was taken away from us.. Pretty much played the last three games with a broken hand.”