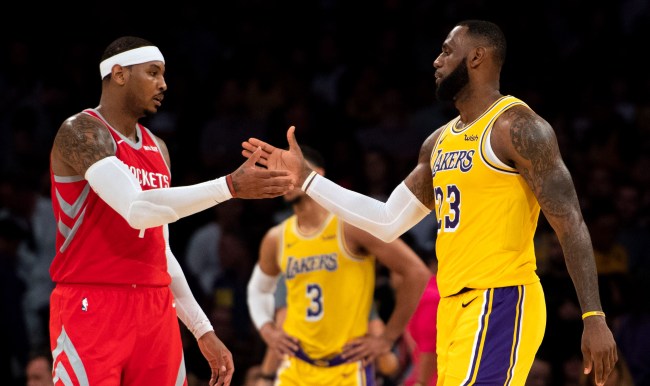 LeBron James, Carmelo Anthony, Dwyane Wade and Chris Paul have become what is known as the banana boat crew ever since photos of their vacation together in the Bahamas back in 2015 went viral on the internet.

In case you somehow missed it back then, there was a good reason that this trip went viral.

Here’s the infamous banana boat picture which is legitimately hilarious. Pictured is Gabriel Union Dwyane Wade and LeBron James. Carmelo Anthony took this picture. Dwyane is retired. LeBron and Carmelo will play against each other tomorrow night for banana supremacy pic.twitter.com/oN5p1JzgQ8

They will never, ever not be known as the banana boat crew after everyone saw that.

One thing that many fans may not be aware of is that during their Bahamas vacation Carmelo Anthony almost drowned.

As LeBron and ‘Melo get set to face off in this year’s NBA playoffs, James shared more information about the time he saved Anthony from drowing in the ocean while on vacation.

“I just knew that he was not back in the boat with the rest of us, so I went out looking for him,” James told the media on Monday. “And through the grace of God and through strength and not being afraid of the water, I was able to help him back to the boat. It was the only thing that was on my mind at that point and time, was getting my brother back to the boat.”

When asked if he thought Anthony was in danger when he spotted him, James replied, “I seen the current was a little bit stronger than what it first started at where we were and I mean, I don’t know, it’s a blessing, honestly. You know, we all talked about it and he told me, you know, he felt like I saved his life and, you know, I don’t really know what to say to be honest. I’m just happy he’s still here, obviously.”

Back in March, Anthony, Wade and Wade’s wife Gabrielle Union also talked about the time they almost lost ‘Melo in the Bahamas during an Instagram Live session.

“We couldn’t see you!” Wade interjected.

“I know. And it was windy. All type of sh*t was going on in my head, I’m going to be honest with you,” he admitted.