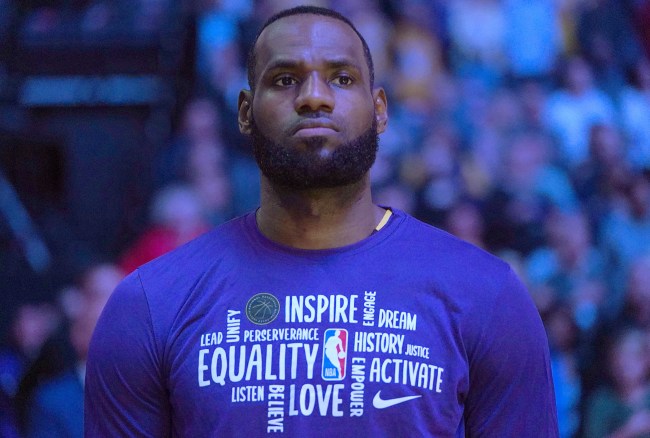 LeBron James spoke out about the shooting death of Ahmaud Arbery on Twitter Wednesday night after a video leaked that reportedly shows a man and his adult son chase down Arbery in a truck and fatally shoot him.

Arbery, a 25-year-old black man, was killed on Feb. 23 in Brunswick, Georgia but his case was shelved until a video was leaked on the Internet Tuesday alleging to show two white men, Gregory McMichael, 64, and his son Travis McMichael, 34, get in a pickup truck, track him down and shoot him while he was jogging on a residential street.

We’re literally hunted EVERYDAY/EVERYTIME we step foot outside the comfort of our homes! Can’t even go for a damn jog man! Like WTF man are you kidding me?!?!?!?!?!? No man fr ARE YOU KIDDING ME!!!!! I’m sorry Ahmaud(Rest In Paradise) and my prayers and blessings sent to the….. pic.twitter.com/r1PNxs8Vgn

No arrests were made more than two months after the fatal shooting because the district attorney believed the two men acted in self-defense.

The previous DA – George E Barnhill – claimed the two men pursuing Arbery were acting within the scope of Georgia's citizen's arrest statute, and that the guy shooting an unarmed jogger with a shotgun was acting in self defense. https://t.co/qUKEzOCDbg

The release of the video on Tuesday created enough of an outcry from the community that the case will now be sent to a grand jury.

The death of Ahmaud Arbery in Brunswick has drawn national attention. The DA over the case says he will bring the evidence before a grand jury when they're allowed to convene one; emergency order expires June 12 as of now. Here's his letter via Brunswick DA Jackie Johnson pic.twitter.com/HhiGAZtqjX