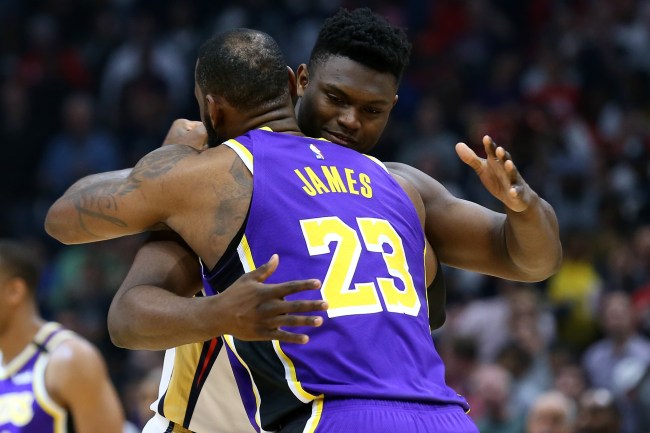 LeBron James says it’s his responsibility to mentor the young up-and-coming stars in the league and he doesn’t give a damn about those who criticize him for it.

After Sunday night’s Pelicans-Lakers game, LeBron had a lengthy chat with Zion Williamson on the court.

Funny, LeBron seems off-balance because Zion won't suck up to him the way other young stars do. I love Zion for keeping a competitive arm's length from LeBron. So LeBron approached Zion after the game and whispered advice to him. HE DIDN'T ASK FOR IT, KING. GIVE IT UP.

On his words to Zion, LeBron says he thinks it’s his responsibility to mentor: “Anybody that says, ‘LeBron, why would he do that while he’s playing? He’s showing signs of weakness, he’s buddy-buddy with these guys he’s going against.’ Tell em to kiss my ass. With a smile, too.” pic.twitter.com/pKSSiU5OrN

"Anybody that says that 'LeBron why would he do that while he's playing? Is he showing a sign of weakness? He's buddy-buddy with guys he's going against. Tell them they can kiss my ass … with a smile too.”@KingJames with a word for the critics. pic.twitter.com/Xv5ZaNhRt3