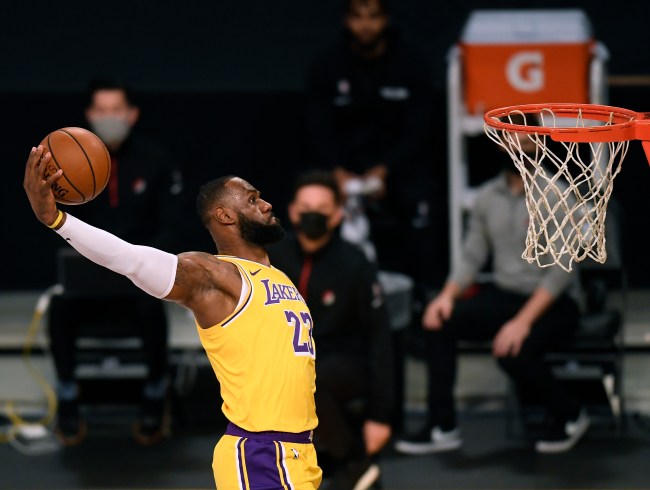 LeBron James has averaged at least 25 points per game for 17 straight seasons.

This bears repeating: Despite having only one scoring title, LeBron James has averaged 25 points per game for 17 straight seasons.

For perspective, Michael Jordan, Kobe Bryant, Kevin Durant, and Karl Malone are the next in line in NBA history with 12 seasons averaging 25 or more.

This is absurd, historical, God-like. Nothing can diminish this incredible fea–

Since I was 19 years old! And I’m a pass first guy. Always been. That’s why I’m never mentioned with the greats of scoring huh?? That’s perfect cause I’d rather keep it that way! 😁. #ThekidfromAKRON🤴🏾 #SFG🚀 #JamesGang👑 #Blessed🙏🏾 pic.twitter.com/QGqFFHu3jj

“Guys, guys. I know Steph Curry has been flooding your feeds because he just won the NBA scoring title after becoming the oldest to win it since Jordan while also breaking the Warriors all-time scoring record, but I’m going to re-post this graphic from some random stat account that I don’t even follow just to play the underdog and shine a light on my own accomplishment.”

I’m not one of them, but I know a lot of LeBron haters, and exactly ZERO of them refuse to mention him among the scoring greats. LeBron’s out here acting like the public is equating him with Mark Madsen—“NEVER mentioned.” Dude, you are the topic of 90 percent of basketball-related Twitter discussions and the other 10 percent are sleuths trying to figure out if the account in question is Durant’s burner.

There are two schools of thought responding to this tweet:

famously not mentioned with the greats "lebron james" https://t.co/pPlMqKu9cn

This mfer will go down as one of the greatest to play basketball and he still out here getting triggered lmao https://t.co/Qq9JbBetk2

This man is acting like he’s never mentioned among the greats on the same app that people will make his GOAT argument daily https://t.co/y0zgUUo2WE

LBJ is the Drake of basketball.

Puts up undeniable numbers, but very corny and would be much much more universally respected if he just played it cool. https://t.co/lcdJmAFm8O

You are fucking 3rd on the all time scoring list. What the absolute fuck are you talking about? https://t.co/YKx8V7Que0

Why does this man always act like he isn’t considered, at worst, the second best player of all time https://t.co/IX7EY29CUh

I’ve said it before and I’ll say it again: The best thing to happen to Michael Jordan was the era he played in—no social media, no chance for over-exposure, no opportunity to get wrangled into petty Twitter narratives. LeBron has a couple glasses of pinot and his Twitter fingers start dancing.