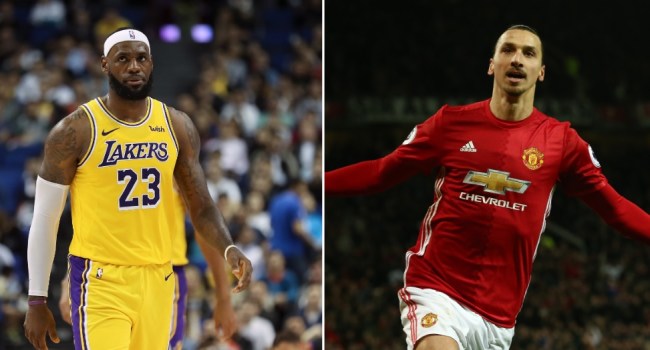 On Thursday, Ibrahimović went viral when he said LeBron and other athletes should stay out of politics and stick to things they’re good at.

“LeBron is phenomenal at what he’s doing, but I don’t like when people have some kind of status, they go and do politics at the same time what they’re doing. do what you’re good at.”“I play football because I’m the best playing football, I’m no politician. If I’d been a politician, I would be doing politics. This is the first mistake famous people do when they become famous: for me it is better to avoid certain topics and do what you’re good doing, otherwise you risk doing something wrongly.”

On Friday, LeBron was asked about Zlatan’s comments and he started off by saying that he was never going to “shut up about something that’s wrong.”

At the end of the day, I will never shut up about things that are wrong. I preach about my people and I preach about equality, social justice, racism, voter suppression, things that go on in our community because I was a part of my community at one point and saw the things that were going on, and I know what’s still going on because I have a group of 300-plus kids at my school that are going through the same thing and they need a voice. I’m their voice and I use my platform to continue to shed light on everything that might be going on, not only in my community but in this country and around the world.

LeBron basically calls Zlatan a hypocrite for telling him to stay out of politics "I'm kind of the wrong guy to go at because I do my homework" pic.twitter.com/1ztZ2bpnqu

It’s funny he’d say that because I believe in 2018 he was the same guy who said, when he was back in Sweden, talking about the same things, because his last name wasn’t a certain last name, that he felt like it was racism going on when he was out on the pitch. Right? He did say that, right? I thought he said that.

I speak from a very educated mind. I’m kinda the wrong guy to actually go at, because I do my homework.

LeBron called out Zlatan for being a hypocrite: "He was the same guy who said when he was back in Sweden … because his last name wasn’t a certain last name, that he felt there was some racism going on when he was out on the pitch." https://t.co/KSlFDtRoeH