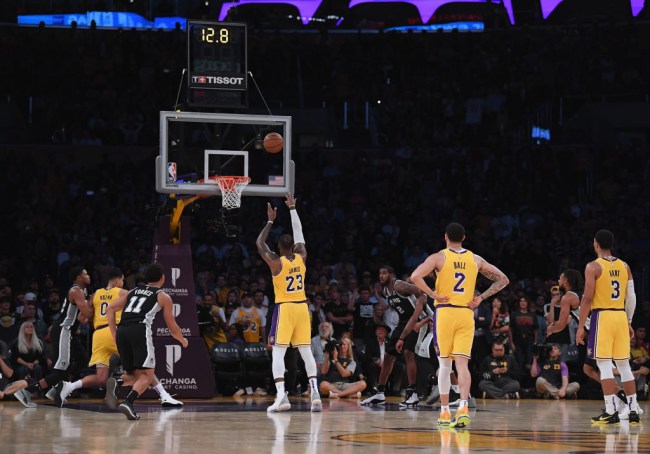 The Laker LeBron is off to a less than ideal start as his new team is winless through three games, victimized by the Trail Blazers, Rockets and Spurs, and giving up a shade under 132 points per contest. This season marks the first 0-3 start since 2004 for LeBron, his second year in the league.

In an overtime loss to the Spurs on Monday night, LeBron helped his team fight back from an 18-point deficit at home with 32 points, 14 assists, 8 rebounds, and a tying 28-foot 3-pointer from the top of the key with 3.3 seconds left in regulation.

James’ proficient night didn’t come without some muffs. With 10 seconds remaining in the fourth quarter and the Lakers trailing 128-125, James signaled for a timeout as teammate Josh Hart was advancing the ball. Thankfully for James and the Lakers, who had no timeouts remaining, it was not granted by the referees.

More notably, with the Lakers leading by one with 12.8 seconds remaining in overtime, James missed two straight free throws. After the game, ESPN Stats & Info released a wild stat that will validate all Kobe truthers in the circular LeBron vs. Kobe debate.

LeBron James missed 2 FTs with 12 secs left in OT and the Lakers up 1. In the final 15 seconds of the 4th qtr/OT, LeBron is 10-21 (48%) on FTs in one-score games since the start of last season. That's the worst FT pct of any player with at least 10 FTA in those situations. pic.twitter.com/VydjZfZDTL