LeSean McCoy Goes In On Kyler Murray, Calls Him ‘Trash’ And Says He Plays ‘Like A High School Player’ 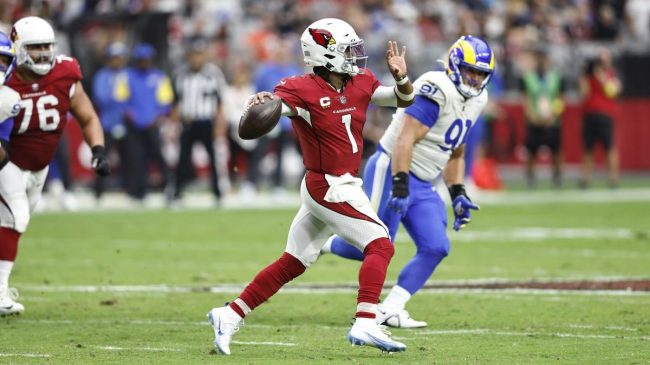 Kyler Murray has not had the best start to the 2022 NFL season. But one former Pro Bowler took it to the next recently by calling Murray a “trash” player.

The Arizona Cardinals Pro Bowl quarterback came under the gun after signing a massive contract extension in the offseason. That contract also came with a unique clause emphasizing Murray’s allegedly poor preparation habits.

The Cardinals eventually backed down and removed the clause after backlash from Murray and others across the league. But now they may wish they have stuck to their guns.

Arizona is just 1-2 through its first three games and much of the team’s struggles have centered on poor QB play. Murray is averaging 261.3 yards per game, but he’s thrown for just three touchdowns all season and one interception. He’s also struggled to create with his legs, rushing for just 21.7 yards per game.

Fans, media and former players have all taken notice of Murray’s struggles.

LeSean McCoy is a six-time Pro Bowler, two-time Super Bowl champion, and knows a thing or two about playing with great quarterbacks. McCoy began his career in Philadelphia with Donovan McNabb and ended it in Kansas City and Tampa with Patrick Mahomes and Tom Brady.

So he clearly knows what a great quarterback looks like and the type of work it takes to get there.

McCoy also clearly believes that Murray isn’t that level of quarterback and wasn’t afraid to share his thoughts on a recent episode of the “I Am Athlete” podcast.

I AM ATHLETE TONIGHT!

“He’s trash. Overhyped. Overrated,” McCoy said. “He plays like a high school player. Runs around, runs backward, he does a circle, the ballerina circle, then goes left, goes right, turns all the way around again, then looks for a wide receiver. That’s not how you play quarterback.”

McCoy was then asked why he feels Murray is “trash” when Mahomes also improvizes. He answered by saying that the comparison wasn’t fair.

“He ain’t Mahomes,” said McCoy, who spent 2019 in Kansas City. “Let me tell you about Mahomes real quick: the majority of Mahomes’ passes are (based on) timing. Third step, hit, boom, ball’s out. Fifth step, boom, ball’s out. Now sometimes he goes off script, we all can do that … (but) not every pass! Every pass, (Murray is) holding the ball, let’s make a miracle. Every game he’s played. Watch him play. It’s really embarrassing, to be honest. Like, who’s coaching this kid?”

He then stated that the independent study clause should have remained in Murray’s contract.

“When a quarterback is running around like that all day, all night, all game, that’s because he’s not reading any coverages,” he said.

Murray has certainly struggled. But calling him “trash” is a pretty harsh take.