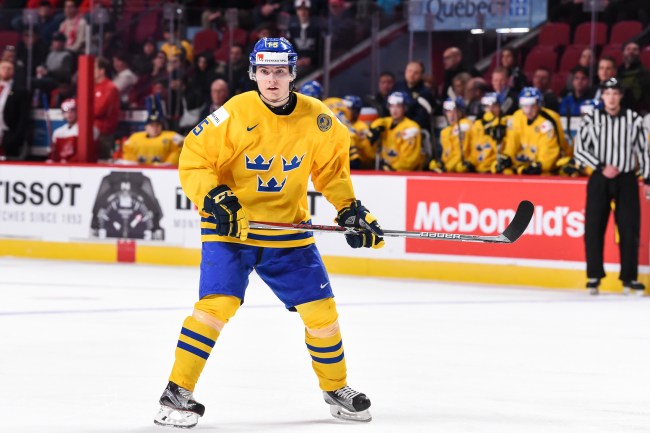 Y’all might remember former New York Rangers prospect Lias Andersson from the 2018 World Junior Ice Hockey Championships where he captained Team Sweden win a Silver medal which he then promptly took off and threw into the crowd in frustration, a move he was suspended 4 games for at the 2019 tournament (same tournament, the next year). Or you might’ve seen him playing for the New York Rangers over the 2018/19 and 2019/20 seasons where he appeared in a total of 59 games but managed to only put up 7 points (2G, 5A).

Lias Andersson reportedly asked the Rangers for a trade and was loaned to HV71 in the Swedish Hockey League this past season where he appeared in 15 games (7G, 5A) before being traded to the Los Angeles Kings this month (October 7th). While still on loan with HV71 and playing in a SHL game just a few days before being traded to the Kings he was called for this absolutely nasty hit which would’ve gotten him thrown out of a game in the NHL.

Here’s that hit which resulted in a hefty fine:

Not only was he suspended 5 games but he got hit with a fine of 80.000 kronor which converts to 9,169.58. That’s a pretty massive fine for a ‘prospect’ playing in the Swedish Hockey League. I could look up his current salary over there but it’s easier to just look up how much money he’s made in his career up to this point.

According to CapFriendly, the answer is he’s made $2,682,500 in salary so far in his career so all things considered, a $9K+ fine shouldn’t be life-changing money but to him it was. He said in an interview that he had to sell his car in order to pay the fine (via Bardown):

Did you pay directly?

– I actually sold my car and paid for it.

– No no. I had the car parked at home in Gothenburg for a long time and had still intended to get rid of it. But had not taken my time. It was time now, so I went plus / minus-zero on selling the car and paying the fine.

It’s unclear what the LA Kings will do with him. Presumably, they’ll want him to play for the Kings since he already has plenty of experience in the NHL but it’s still unclear if his NHL career is going to pan out like it was expected when the Rangers drafted him 7th overall in the 2017 NHL Draft.

Here’s that moment he tossed his silver medal into the crowd in case you want a reminder on that:

That was wild when it happened. A moment that will follow him for his entire career.