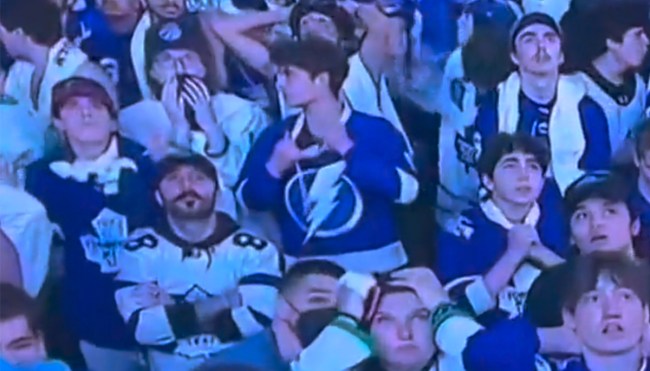 The Toronto Maple Leafs have hit plenty of road bumps in their quest to bring a Stanley Cup back home for the first time since 1967, and it’s been almost two decades since the franchise has been able to advance past the first round of the playoffs despite having six chances to do so in that span.

On Wednesday night, the team had the opportunity to finally reverse its fortunes after taking the ice in Tampa Bay sporting a 3-2 lead in their first round series against a Lightning team that was in a position to extend an impressive streak of bouncing back following a playoff loss.

The Leafs’ biggest obstacle tonight may be streak juju.

We know Lightning are 16-0 following a loss in last three playoffs, but here’s another one:

Since 2018, Leafs have had six opportunities to advance to Round 2. They are 0-6 in those games

For a moment, it looked like there was a chance the Leafs might actually pull it off after heading into the third period with a 3-2 lead. However, the Lightning were able to force overtime, and while Toronto seemed to have the momentum for the majority of the extra period, Braydon Point was able to send the series back to Toronto for the deciding contest by netting the game-winner.

That goal meant we were once again treated to a tradition unlike any other: the broadcast cutting to a shot of the despondent fans gathered in Maple Leafs Square outside Scotiabank Arena after being treated to their latest dose of disappointment.

So mean to cut directly to Toronto. Don’t worry Leafs fans, I’m back with you Saturday. I made a promise and I plan on keeping it. pic.twitter.com/aziojouNRm

However, the real highlight was the lone Lightning fan standing amid a sea of bitter Toronto supporters who was captured erring on the side of caution by quickly slipping off his jersey after Tampa Bay capped off the comeback.

The sole Tampa Bay Lightning fan in the Toronto crowd makes a smart decision after the Leafs lose in OT 😂 pic.twitter.com/d52Ez9Z4dZ

You can never be too careful.