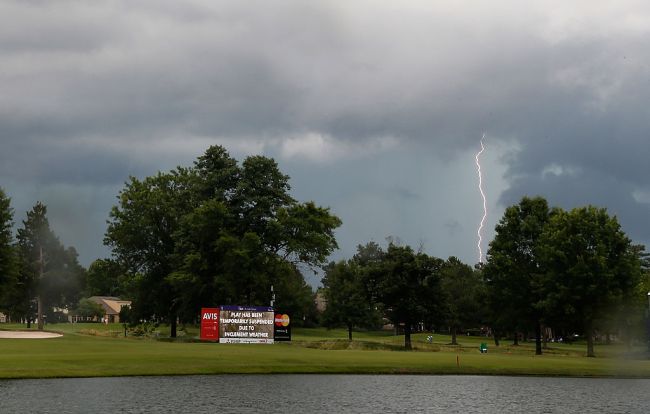 What began as a sunny afternoon at Topgolf quickly became an extremely dangerous situation and a viral moment for Tomas Gomez.

The ball never stood a chance.

The Texas teenager and a group of his friends were swinging some irons and thwacking some golf balls when it began to pour in the last 30 minutes of their allotted time slot.

Of course, golfing in a thunderstorm is not only a terrible idea, but not allowed. As a result, Gomez and his friends had to head in and call it a day.

But Gomez wanted to hit just one more ball.

He thought it would look cool if he crushed a bomb into a torrential downpour and asked his friend to film him take one last hack. The resulting video is crazy.

Gomez hit his ball at 88 miles per hour into the storm. Not but 100 yards off of the tee box, a lightning strike hit the ball in mid-air.

The average speed of lightning falls around 670,000,000 miles per hour, so the ball never stood a chance. Even if it came off of Bryson DeChambeau’s driver.

As his friends scream in a combination of fear and delight in the background of the video, Gomez can be seen running for cover. It was probably a good idea not to hold his back swing and give the lightning an open look at his club.

“I heard the thunder and my instinct was to run… It was all a blur,” Gomez said to KSAT. “It could have hit me… or any of us. After I wasthinking about it for a while, It was actually pretty scary.”

Fortunately, everyone was safely evacuated from the Topgolf without injury. Only the golf ball was injured.

In fact, Topgolf found the ball. A second video, posted on TikTok, showed a different golfer teeing up a blackened— but otherwise hittable ball— claiming it to be the one Gomez sent into the storm.

Pretty wild that the ball was still completely fine, but turned into a crisp, charred black. Let this be your reminder not to go golfing in a thunderstorm, folks. You could be that ball.