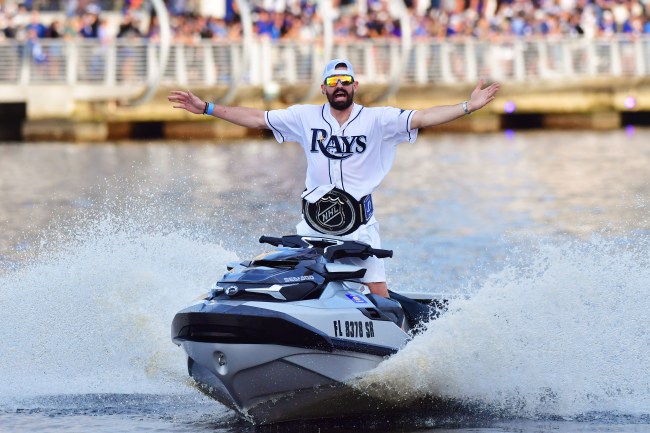 The Tampa Bay Lightning franchise won their second-ever Stanley Cup after making it through the strangest Stanley Cup Playoffs in history. You know the deal, every participating team was secluded in the bubbles up in Canada for months.

Immediately after Tampa Bay won the Cup I saw a lot of salty Canadian fans saying this year deserves an asterisk because there wasn’t the pressure of traveling and hostile crowds but that’s all poppycock. Every team competed under identical conditions and the best team won. The Lightning were the favorites and they came out on top. No asterisk needed whatsoever.

After winning the Stanley Cup, the Tampa Bay Lightning were the first team in the United States from a ‘Big 4’ professional sports league (NHL, MLB, NBA, NFL) to hold a championship parade but Tampa put their own flair on it and held a boat parade through downtown Tampa before another celebration at the outdoor Raymand James Stadium.

Lightning players rode on boats, some on Jet Skis, all passing around the Stanley Cup for a raucous day of drinking and memorable pictures. One fan memorialized the day with the greatest Stanley Cup tattoo I’ve ever seen (I’m a Lightning fan btw). It shows Alex Killorn (a Harvard guy, haven’t you heard?) on a Jet Ski and what appears to be Lightning captain Steven Stamkos who appeared in the playoffs for two minutes which was long enough for him to score a goal. Take a look at this beauty of a tat:

This tattoo of the lightning at their Stanley Cup boat parade is UNREAL 🌩. . (Via: jamesdupper_irt)

Here’s that moment which was inked on:

The account tags tattoo artist @jamesdupper_irt whose tattoos look similar to this style but are often very colorful so methinks this will have some vibrant colors in the coming days.

Alex Killorn actually released a shirt with this Jet Ski moment on it as a way to support both the Tampa Bay Lightning and the Tampa Bay Rays who square off against the Los Angeles Dodgers in the World Series.

There is only one way to celebrate your Stanley Cup Champion @tblightning while rooting for the @raysbaseball at the same time! Limited edition will not be restocked once sold out. Go to alexkillorn.com/shop (link is in the bio) to purchase. Thanks to @brandhousepromotions and @laneypars for making it happpen.