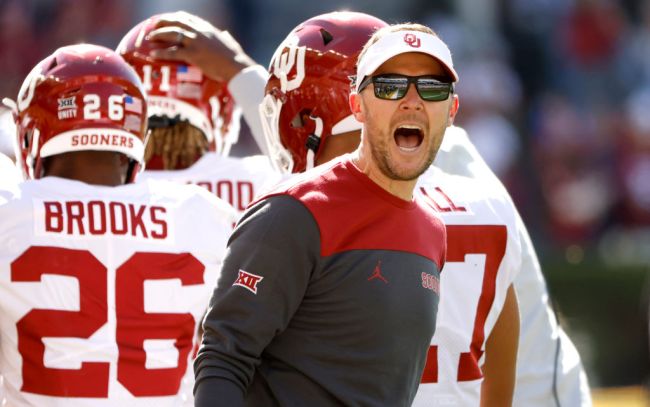 On Saturday afternoon, Riley lost his mind on the sidelines after Baylor kicked a field goal while up seven with one second left on the clock which led to fans prematurely rushing the field before the game was over.

While speaking the media after the game, Riley said he was angry with the refs for not calling a penalty on Baylor after fans rushed the field. Riley went on to say that he didn’t agree with Baylor coach Dave Aranda for violating the “code of sportsmanship” by kicking a field goal with one second left in the game.

Lincoln Riley said he was upset that Baylor wasn’t assessed a 15-yard penalty for the field rushing. He also said he understands why Dave Aranda kicked the FG, but said he wouldn’t have done it and that it goes against a “code of sportsmanship"

You're leaving for the SEC out of nowhere. Screw your "Code of Sportsmanship".

Lincoln can explain his code of sportsmanship to his new conference mates. https://t.co/j6Q7vxRkAA

If Lincoln thinks that went against the code of sportsmanship, just wait until you see what Alabama and Georgia do. It’s no mercy for them. https://t.co/GNVoub2b30

This the same coach who beat a team 76-0 earlier this year? Code of Sportsmanship my ass. https://t.co/VpV01CBmt9

@OU_Football and Lincoln Riley can shut the hell up about their "Code of Sportsmanship". pic.twitter.com/x4G81yYHb7