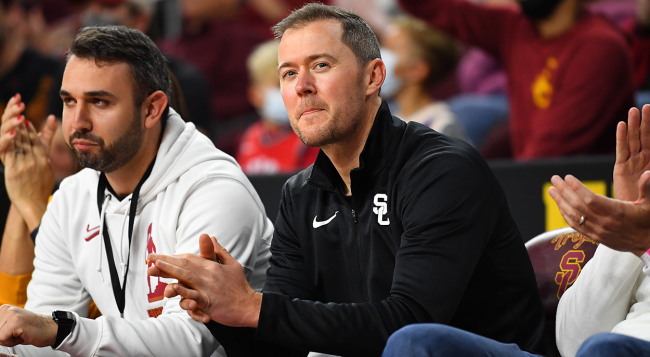 The former Oklahoma head coach spurned the Sooners for sunny Los Angeles, accepting a position on the West Coast with the USC Trojans. The shadiness surrounding that deal struck a nerve with OU fans as Riley claimed to have been in contact with USC for mere hours before accepting the job.

The news broke shortly after the Sooners’ final regular season loss, with Riley stating that he’d never spoken with another program prior. Of course, no one truly believed his story, and the hatred towards the coach grew stronger after taking a number of Sooner stars with him through the transfer portal.

The feud between Riley and the Sooners has been noted all offseason, but now, he’s making new enemies.

Rumors began swirling Saturday that Biletnikoff Trophy winner Jordan Addison is mulling over a transfer decision. The pass catcher is still on the roster at Pitt, but there have been reports that the wideout has already been offered a massive NIL deal to transfer to USC.

These rumors surfaced with Addison not yet in the transfer portal, meaning the possibility of tampering is in play. The Panthers have already contacted the NCAA regarding these accusations as they hope to hang on to their top player.

Now, Riley is being dragged by a new fanbase as he continues to create rivals across the nation.

Lincoln Riley "I think at some point we'll have to put in some guardrails. Some ways to ensure when this can happen, when this can't happen so that players, staffs, all that are a little bit more on the same page

Proceeds to tamper with Jordan Addison

Riley was asked about his thoughts on the transfer portal earlier this offseason. This, of course, coming after snagging multiple players from his previous roster at Oklahoma.

Riley clarified that he got those players from the portal, not from Oklahoma, then he had the audacity to say that the transfer process needs more regulation.

“I think at some point we’ll have to put in some guardrails. Some ways to ensure when this can happen, when this can’t happen so that players, staff, all that are a little bit more on the same page. “

Of course, this comment is coming back to bite him with the recent tampering allegations of Addison, a player that was not in the portal. And with a reported NIL deal already in place, it seems silly to think that contact with the pass catcher had not already been made.

Now, Riley is being crushed for his hypocrisy, once saying that transfers should be regulated before going full rogue to land a top player that wasn’t even on the market.

I love how reporters, like Bruce Feldman, are just glossing over and ignoring the fact that Addison is still on Pitt's roster which means @USC_Athletics & @LincolnRiley are tampering/cheating/attempting to buy players!
Where's the reporting on that at?#JustSaying https://t.co/qylwMGpgXE

Lincoln Riley probably: “I didn’t get Jordan Addison from Pitt, I got him from the transfer portal.”

Remember when Lincoln Riley didn't want to release Austin Kendall at WVU and Chandler Morris at TCU citing that transfers within the conference were bad for the game?

Lincoln Riley once blocked a transfer of a 3rd string QB because of tampering… pic.twitter.com/qOBLJOxvzQ

@NCAA How the hell is USC able to offer Jordan Addison a 6 to 7 figure deal to leave Pitt? This is the definition of tampering. He's not even in the transfer portal. This is getting out of hand. Lincoln Riley buying a National Championship and you'll turn a blind eye, no doubt.

Lincoln Riley's comments the other day, complaining about the landscape, and then proceeding to engage with Jordan Addison in this fashion really don't square. Talk about disingenuous and hypocritical. That's the definition.

Not a great look for Riley.