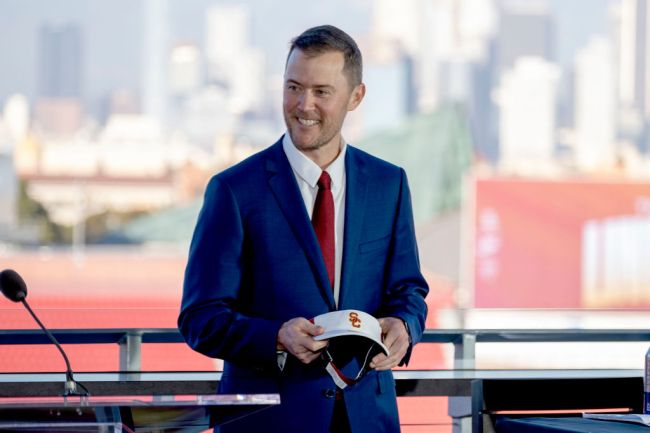 Lincoln Riley claims that he made his decision to leave Oklahoma in a matter of hours, and college football fans aren’t buying it.

On Monday night, Riley made an appearance on SportsCenter with Scott Van Pelt and went into to detail on how he decided to become the next head coach of USC. Riley first engaged in talks with USC “very early Sunday morning” hours after Oklahoma’s loss to Oklahoma State.

"Honestly, Scott, that's the first conversation at any point in my time at Oklahoma that I'd ever had with another football team." pic.twitter.com/bYEpFreQKK

“Very early Sunday morning USC engaged with some interest and wanted to have a conversation and honestly, that’s the first conversation at any point in my time at Oklahoma I’ve ever had with another football team,” “I think just the history, the tradition, the excitement of a new opportunity was enough that we wanted to have a conversation and it moved quickly. It was tough decision. I mean, leaving a place like Oklahoma is not easy, especially when you have the history we had there.”

Van Pelt pressed Riley on his claim that he first spoke to USC on Sunday morning and the former OU head coach said he had a conversation with people close to him about USC’s interest in hiring him on Saturday night.

SVP then pressed Lincoln Riley on the idea that USC conversations didn't begin until Sunday morning.

"You gotta call somebody early in the morning. By the time I'm awake, it's like the train was down the tracks. So this was like a first thing in the morning conversation…?" pic.twitter.com/rgPrB3qTGA

“We had a conversation late that night when we got back to Norman when we knew that the interest from USC was real, and then we slept for, I think, about two hours and got back up and really hammered through it.”

So you’re telling me, a guy who took several months to decide between Kyler Murray and Austin Kendall made a massive life decision in like 2 hours? https://t.co/4eDYqqGJVy

Lots of other reporting disputes that #Sooners

So he decided in like 5 hours and successfully convinced not only his wife but 4 assistant coaches/staffers who also had to go convince their families to move across the country? And I’m to believe this happened in that span? Uh huh.

We all know how Lincoln loves his half truths, so who is going to ask him the follow up question of:

“Was Saturday night/Sunday morning the first time that your agent or anyone that represented you have conversations with USC?”

Gotta act like you’re in a court room with this 🐍 https://t.co/FwMDmfFNWA

The old coachspeak loophole: “I” haven’t spoken with anyone (but my agent has) https://t.co/OvETOjxj3X

Translation: My agent and the folks at USC have been best buds for weeks now. https://t.co/Yh8ELPmQnb

Lincoln Riley didn't have to personally talk to another football team or school for all the details to get ironed out. That's why he has an agent. https://t.co/Kc4EKduqYf