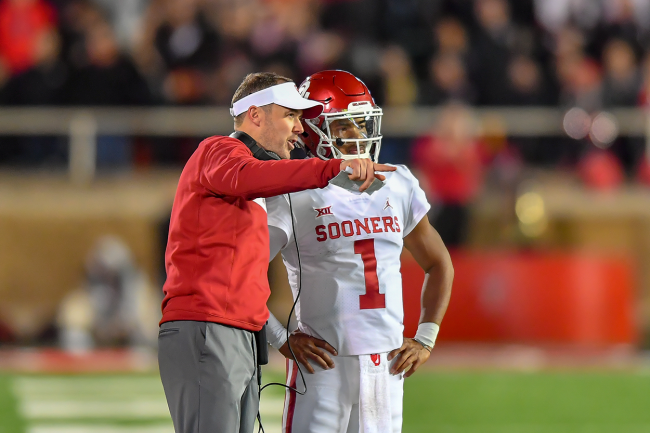 Kyler Murray got paid earlier this week. The 24-year-old quarterback will be the second-highest paid in the league this season and NFL fans were sent into a frenzy when the deal was announced.

Not long thereafter, the biggest, funniest, most eye-popping news of the year came to light. Within the massive contract extension, the Cardinals included an unusual clause that required Murray to participate in four hours of “independent study” during each game week.

It was super hilarious. But the saga didn’t stop there.

On the day after the clause was released to the public, Murray spoke to the media at training camp. He eviscerated his organization for putting him in such an uncomfortable spot and made it clear that there is no reason to question his work ethic. Even though he has said before that film isn’t necessarily his thing.

And then Arizona completely backed down. The team removed the clause all together.

On Friday, Murray’s college head coach Lincoln Riley took the podium at Pac-12 Media Day. He was asked about the Heisman Trophy winner’s bizarre clause and whether he ever had an issue with his former quarterback.

Lincoln Riley said that he never had an issue with Kyler Murray’s work ethic.

However, to make his point, he pulled the ultimate okey-doke.

Initially, Riley said that he did worry about Murray. But then he explained his worries were because because Murray actually worked too hard.

“Yes, I was concerned,” Riley said. “I was concerned he would burn himself out. He pushes the limits. He loves football. He loves to compete & win. I never worried about the amount of preparation he put in.”

Although this directly contradicts some of what Murray has said in the past, it was high praise. And Riley’s delivery only added to the entertainment value of the Cardinal’s bizarre decision to add the independent study clause.

He had us in the first half, not gonna lie.