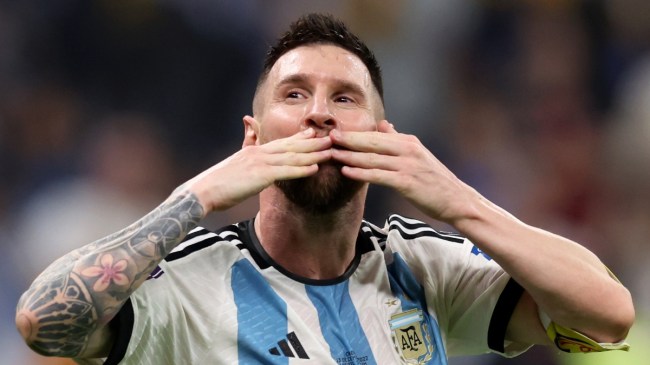 The FIFA World Cup finals are set as Argentina takes on France for the prestigious award. Lionel Messi has been on a tear, as usual, but fans show support in the best way possible.

After Argentina clinched a finals bid, fans couldn’t help but celebrate and party. However, unexpectedly, they swarmed the home of Messi’s late grandmother.

FOX Soccer shares the Tik Tok video of hundreds of people standing outside his grandmother’s old house. She, unfortunately, died back in 1998. Even so, fans made sure to honor Lionel Messi’s grandmother by chanting “the grandma of Messi.” Especially considering he honors her by pointing to the heavens every time he scores a goal.

Argentinians know how much his grandmother meant to him and his family. With Lionel Messi leading them through the World Cup, fans showed their support for him by honoring his grandma. Is that not the coolest thing you’ve heard?

As of right now, it’s not known who lives in the house currently. Regardless, they surely didn’t seem to mind hundreds of people chanting for Lionel Messi’s grandma.

We’ll see if Argentina can get the job done. They’ll be taking on a tough France team who has looked like legitimate contenders in their own right. They’re clearly a powerhouse, as France is aiming for back-to-back World Cup wins.

Lionel Messi vs. Kylian Mbappe. The veteran vs. the young star. Tune in on FOX on December 18 at 10:00 am to see if Argentina can take down France.