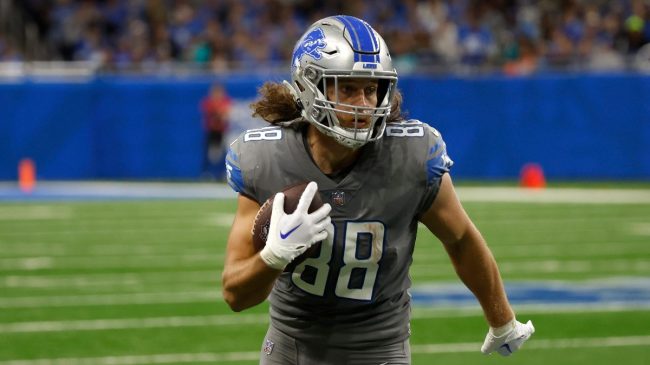 In a surprising turn of events, the Detroit Lions trade TJ Hockenson to the Minnesota Vikings. It’s a rather bold move, as Hockenson is regarded as one of the best young tight ends in the league. Additionally, the front office shipped him off to a division rival as well. Now, the fanbase is freaking out about it.

As you can imagine, Lions fans aren’t taking this trade too well. Hockenson played a major role in the offense and has been a major asset to Detroit. However, they seem much more concerned by the fact he’s playing for a divisional rival than anything else.

Why trade one of your best players to a division rival?

Is this all just a ploy to ensure the Green Bay Packers don’t win the NFC North?

Lions and Vikings teaming up to ensure packers downfall let’s all laugh at the packers 🤣🤣🤣🤣🤣 pic.twitter.com/hemYgvBdqJ

Not wanting to pay TJ Hockenson a big contract makes sense. It’s still a questionable decision to trade him to the Vikings though.

Don’t give him to a division rival 😂

At the end of the day, the Lions made the decision to trade Hockenson to Minnesota. We’ll see how it plays out, but in the end, the Vikings are looking like legitimate threats out of the NFC North right now.