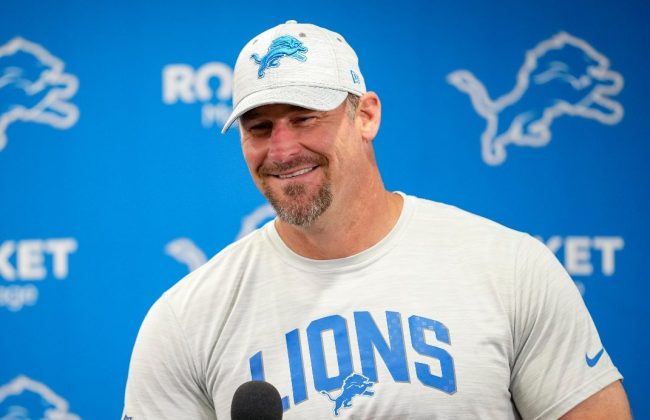 The Detroit Lions have gained a ton of hype ever since hiring Dan Campbell as head coach. He’s chock full of brilliant quotes and his intensity keeps everyone on alert. Additionally, he’s been awesome with the fanbase as he hopes to build a playoff contender soon. On Wednesday, Campbell came through for a young fan by making his dream become a reality.

Dan Campbell met with fans during the Lions practice to sign some autographs. While talking with a young fan, he promises the kid he’ll get TJ Hockenson to give him a shoutout. Campbell even goes the extra mile to write the kid’s name down on his hand so he wouldn’t forget. Shortly after, Hockenson gave the young fan a shoutout he’ll never forget!

Dan Campbell is the man for this.

It’s an absolutely awesome gesture from the Lions’ head coach. Dan Campbell has quickly become the most likable coach in the league. As for the kid looking like a zombie, it sounds like the organization set up a face painting stand at training camp, and the kid chose to look like he got mauled by a lion, per Chris T. Bonjour. Many were concerned about it in the mentions and after some digging, the young fan is doing just fine as his apparent injuries are not real.

They had a face painter there and its supposed to be the mauling of a lion. Not my choice but the kids seem to enjoy it.

Look for the Lions to potentially make some noise this year after having a stellar offseason. The fanbase fully supports Dan Campbell right now, as the roster is looking solid for the upcoming season. If Detroit can finish with a winning record, then the trajectory of this franchise is through the roof.