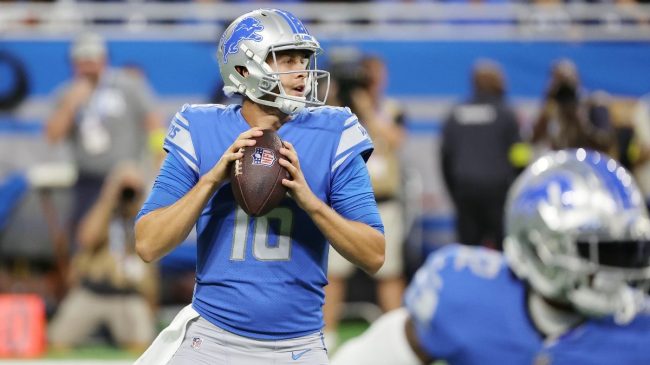 The Detroit Lions have received plenty of hype this season as many are rooting for Dan Campbell to succeed as the head coach. All eyes are on the roster though, as the team must show improvement from last year. Now, it sounds like Jared Goff is all-in on succeeding for the Lions’ offense this season, but his comments might blow up in his face.

Detroit actually looked solid in the final portion of last year. However, it’s yet to be determined whether that will be consistent or not. The coaching staff is still ironing out some kinks but Goff seems extremely confident in the Lions’ offense. So much so, that he claims he’s taking ownership of the team in general, per Pro Football Talk.

“I think I’ve got full control of what we’re doing on offense and full ownership. They’ve given me the reigns and I’ve ran with it as best I can. I know that — I think I know that they’ve been happy with the way things have gone up to this point with me in that position. But it’s, yeah, I feel confident. I feel confident in the guys around me too. It’s been really fun.”

Confidence is a great thing to have. Especially if you’re the starting quarterback of the Lions. Even so, that “ownership” comment in no way, shape, or form could ever backfire. It is Detroit, after all.

Despite that, according to Pro Football Talk, Jared Goff seems energetic and excited to work alongside offensive coordinator Ben Johnson. “The trust he has in me, and the amount of questions he asks me, and vice versa, the amount of questions I can ask him — and his responsiveness, and how great he is at listening, all that stuff is so helpful for a quarterback and I don’t take it for granted. He’s a great coach and someone I’m excited to work with.”

We’ll see how it plays out for the Lions this year as their veteran quarterback is oozing with confidence right now.