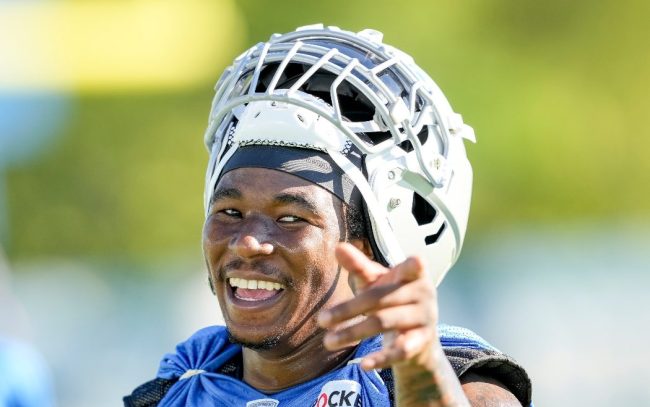 The Detroit Lions are in the middle of training camp and will be featured on HBO’s Hard Knocks this year. Dan Campbell has already provided a glimpse that will fire up anybody who listens. However, Jamaal Williams now does the same thing after breaking down the team to end practice.

Jamaal Williams Fires Up His Teammates In Training Camp

In a quick video, Lions head coach Dan Campbell tells Williams to break down the team. He brings everyone together and delivers an inspiring message. His passion and love for his Lions teammates and the game are clearly seen, as he is brought to tears during his speech.

Don't think these tears are coming from a weak mindset, I will run you over while crying 😤

Detroit faced a ton of adversity last season as it took them forever to win their first game. They looked solid in the final stretch of the season though, which should. give this team some momentum to build upon. The Lions hope to at least contend for a playoff spot but we’ll have to wait and see if they’re up for the challenge.

At the end of the day, Jamaal Williams is one of the most passionate players in the league. He’s also known for his bright personality as his meetings with the media never disappoint. Additionally, he’s become a fan favorite in Detroit as he seems to adopt Dan Campbell’s mantras perfectly. The Lions should be in good hands in the 2022 season as long as they stick together.

Make sure to tune into HBO’s Hard Knocks as the season premiere airs on Tuesday, August 9 at 10 P.M. Eastern.