Lithuanian Broadcasters On LiAngelo, LaMelo Ball After Scoring 80: ‘They Sucked At Defense’ 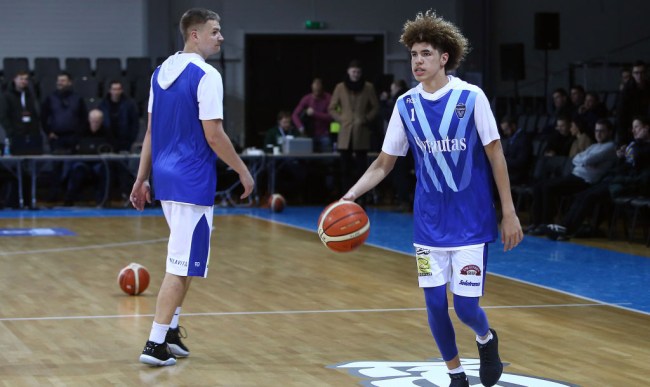 So did you hear the big (baller) news? In their first game with their dad LaVar Ball as an assistant coach for Vytautas, LiAngelo and LaMelo Ball scored a combined 80 points in their team’s 147-142 victory over Alytaus Dzukija. LaMelo dropped 23 in the third quarter alone.

A Vytautas team spokesman, on the move to allow LaVar to coach, told ESPN, “He will be an assistant coach on game protocol but will drive the team through the game and make many of the decisions. The style the team is going to play is going to be LaVar’s choice.”

Since it wasn’t actually a league game, where the team is 0-2 and the brothers have combined for just 33 points, but rather just a part of the Big Baller Brand Challenge, Vytautas’ wacky coach Virginijus Seskus told ESPN he approved of the move.

“LaVar wants the team to play fast. He also has an idea for a new way for the team to play defense, so we’re going to try it out tonight. Today we’ll be like two equal coaches, but this will only be for the friendly match. We’ll see how it goes today.”

“Why not let him do it? It’s only a friendly match. It will end, and everyone will forget about it.”

Not if LaVar has anything to say about it.

Despite the win, and the Ball brothers dropping 80 on their opponents, the Lithuanian announcers still remained somewhat unimpressed, making sure everyone watching knew that they “sucked at defense.”

Check out full highlights from the game below…