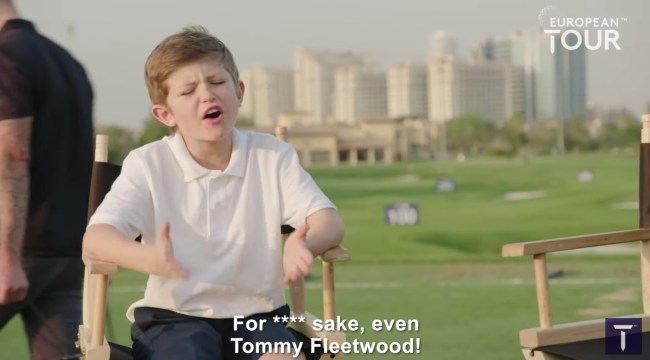 It’s been a long time since we’ve seen ‘Little Billy’ grace social media with his unbelievably entertaining videos interviewing some of the best golfers on the planet. After seeing him interview Rory McIlroy, Graeme McDowell and even Niall Horan a few years back, he’s finally made his return to the interviewing scene.

The European Tour is constantly churning out exceptional content week after week and the latest ‘Little Interview’ is no exception. It could very well be the funniest golf content produced this year.

There are so many great moments here it’s hard to narrow down which are the best.

Billy yelling at Jon Rahm to come to do an interview on the driving range then Rahm ironically saying kids these days have horrible attitudes was a great touch. Ian Poulter picking him up and throwing him out of the player’s lounge was also fantastic as was McIlroy saying ‘he does my head in.’

It’s incredible how the European Tour, during a tournament week remind you, bring together all of these top players and have them participate and act in these sorts of videos. It’s a testament to their video and social teams as well as the players themselves to come together and put out this sort of content.

Which, by the way, we don’t know how many takes some of the player’s interviews took to capture, but these guys can act.

It’s also worth noting that this was done at the DP World Tour Championship which is going on as we publish the article. They captured and then edited this content within a week which is impressive.