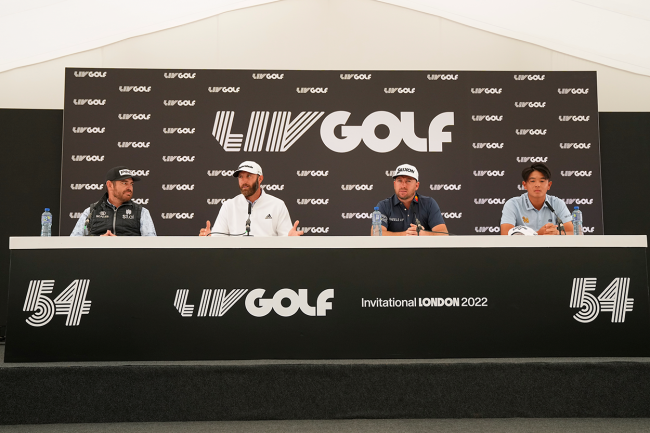 There has been a lot of controversy surrounding the Saudi-backed LIV Golf Tour over the past six months. All of the insanity, contention and altercation can be found HERE.

Things were turned up another notch on Tuesday morning.

The LIV Golf Tour held its first press conference ahead of the inaugural event in London and it reportedly got crazy in a hurry. A reporter was escorted out, participating golfers were held somewhat accountable but dodged definitive answers, and robots were delivering drinks.

That is particularly interesting, considering his previous comments on Saudi Arabia. Fleischer addressed them on Tuesday, putting his comments in the past.

Ari was asked how he squared his current relationship with LIV Golf with his past tweets claiming Saudi Arabia was spending billions to ensure Mohammed bin Salman wasn’t overthrow, and wasn’t this an example of that. Fleisher said that tweet was “a long long time ago.”

Once things got underway, many of the top players all confirmed that they had resigned from the PGA Tour to participate with LIV Golf.

At the LIV Golf Invitational press conference Dustin Johnson & Louis Oosthuizen confirm they have resigned from the PGA Tour. It is being reported Sergio Garcia, Lee Westwood and Ian Poulter have all done the same 😳

Some of the players addressed their standing for the Ryder Cup. As things currently stand, players must be on the PGA Tour to participate. Their participation in the LIV Golf Tour would render them ineligible.

Kevin Na and Talor Gooch said they don't believe this move necessarily means they can't be on Ryder Cup teams. "I honestly don't think it's going to happen," Na says.

It was not only logistical questions.

LIV Golf participants were also asked about the human rights record in Saudi Arabia and ‘sportswashing.’

Sportswashing is defined, loosely, as “the practice of an individual, group, corporation, or government using sport to improve their tarnished reputation, through hosting a sporting event, the purchase or sponsorship of sporting teams, or by participation in the sport itself.”

"The Khashoggi situation was reprehensible…

…But we are proud to help Saudi if they want to use #golf to get to where they want to be"@Graeme_McDowell on why he's decided to join the £202m Saudi-backed @LIVGolfInv, despite the country's human rights record… pic.twitter.com/4vQs7xUZCi

Graham McDowell: "I mean, this has been incredibly polarizing. I think we all agree, the Kashoggi situation, that was reprehensible."

G-Mac on the Saudi 'issue': "If we tried to cure the geo-political problems of every country we play golf in, we wouldn't play a lot of golf."

🗣️ "This has been incredibly polarising, we all agree up here that the Jamal Khashoggi situation was reprehensible"

Talor Gooch said he didn't agree that LIV Golf was a participant in sportswashing. "I don't think that's fair. Also … I'm a golfer. I'm not that smart. I try to hit a golf ball into a small hole. Golf is hard enough. I try to worry about golf, and I'm excited bout this week."

And then things got chaotic. AP reporter Rob Harris tried to ask further questions, but he was denied the opportunity.

Second LIV Press conference (Na, Gooch, Piatt) ends in kerfuffle when the AP reporter tries to ask a question, but is cut off by LIV spokesman. Players file out slowly, awkwardly as LIV officials argue loudly with reporter about how he's not being "polite."

AP’s @RobHarris, having asked a pointed question about sportswashing in an earlier LIVGolf press conference, was just suppressed from asking a question in the latest one despite repeated attempts. Finally resigned to shouting a question, but was shut down again by media officers

A quite mad end to the second #LIVGolf press conference as Rob Harris from @AP was denied asking a question at the end of the session despite repeatedly insisting pic.twitter.com/LHSvaZf9kX

Harris was reportedly not allowed to stay.

It seems AP reporter @RobHarris was led out by security after this happened. (Not a joke.) https://t.co/TZByUUv7nX

Harris was allowed back into the media area after a short time.

Update: Rob has now been allowed back in to the media center by LIV officials.

However, it appeared to come with a caveat. Harris posted a cryptic tweet about what is and is not allowed from the media covering LIV Golf upon his re-entry.

Interesting that this tweet comes following reports that Rob Harris was escorted from the press conference by security, but later readmitted by LIV officials, from @KVanValkenburg. https://t.co/Cg3dwo1AoV

Despite all of the chaos that unfolded at the first LIV Golf media session of the year, it is also worth noting the drink-serving robots.

There is a LIV Golf robot driving around the media tent and offering up drinks as reporters work to file stories. I share this tweet for informational purposes only, not to #GrowTheGame pic.twitter.com/WBL9JXaEPq

Clearly, LIV Golf is off to a unique and polarizing start. It will be interesting to see how this narrative continues to unfold.