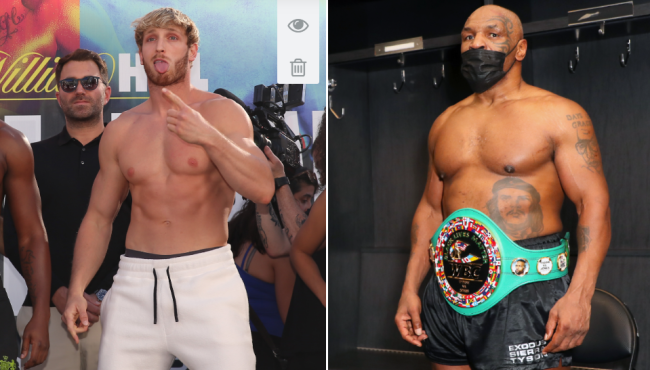 Logan Paul is getting a little cocky after going eight rounds with the much smaller Floyd Mayweather.

While having a discussion on who he’s planning on facing next in the boxing ring, Paul revealed that he thinks he could beat the 54-year-old Mike Tyson.

According to Paul, he thinks he can take on the former boxing great because he’s “old,old.”

Someone mentioned Mike Tyson. My lawyer mentioned it and he’s like, ‘Nah, Tyson will rip your head off, you don’t stand a chance.’ I’m like, ‘I just went through all this.’ You can’t tell me I can’t beat Mike Tyson. He’s old, old.”

Considering the fact that Tyson showed some flashes of his old self during a recent exhibition match against Roy Jones Jr. people didn’t think it was a good idea for Paul to consider challenging the former heavyweight champion of the world to a boxing match.

One Tyson bob and weave uppercut and Jake Paul would be waking Logan up to retire on the spot https://t.co/c0sWGkPyFG

Mike Tyson would hit Logan Paul so hard he would time travel. https://t.co/EwfciVyvaf

Please @MikeTyson please beat the shit out of this kid 👊🏻 https://t.co/CVfNVw21u6

Please let them do it.. I wanna see a dead body https://t.co/IMFuRFrWD6

please do it 😂 I’ll pay to see this lmaoooooooo https://t.co/hg7ZZG6xSq