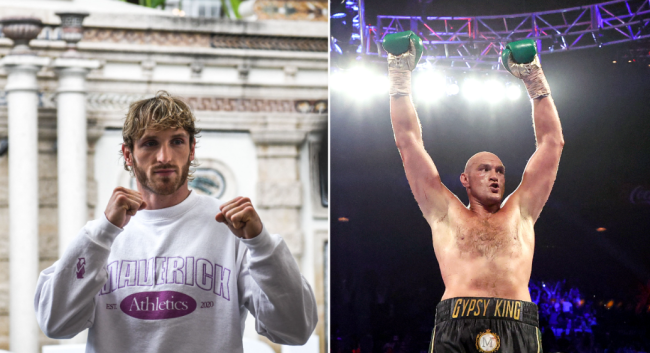 On Thursday afternoon, Paul was in Miami to promote his fight against Floyd Mayweather Jr. that set to take place this weekend live on Showtime PPV.

Logan Paul says Tyson Fury offered to fight him but he wanted no part of Fury @ShowtimeBoxing pic.twitter.com/UFJdypMu0z

During the event, Paul spoke to the media and revealed the one boxer he wouldn’t mess with. According to Paul, heavyweight boxer Tyson Fury slid in his Instagram DMs one time and offered to fight him months ago but the Youtuber admitted he immediately passed because he didn’t want that smoke.

Logan Paul says Tyson Fury offered to fight him but he wanted no part of Fury @ShowtimeBoxing pic.twitter.com/UFJdypMu0z

Tyson Fury, I don’t want to fight him…Tyson pitched me in my DMs and he was like yo, Jake can fight Tommy and you could fight me. and I was like PASS.

It’s probably smart of Paul to pass on fighting Fury considering Fury has knocked out some big dudes in the heavyweight division.