A Guy Ran The 26.2 Mile London Marathon In A Big Ben Costume And Hilariously Got Stuck At The Finish Line 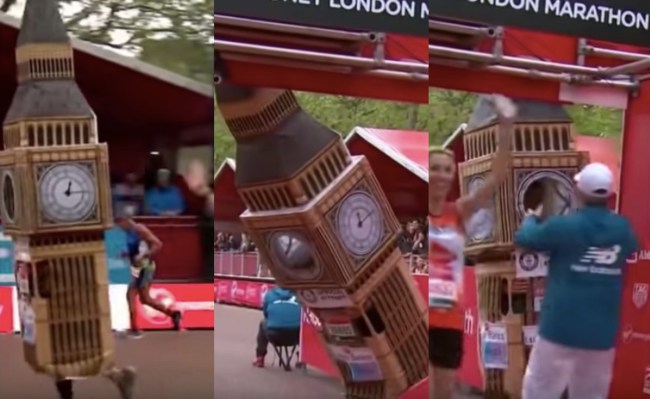 People who run marathons in costumes are certifiably insane. Running a 26.2-mile race is already hard enough. There’s absolutely no reason you should make it more difficult but strapping some bulky and uncomfortable costume on your body.

One of these psychos was on display yesterday in the London Marathon when he ran 26.2 miles while wearing an enormous Big Ben costume only to get clotheslined by the finish line because his costume was too tall (clip below). The 2019 London Marathon saw 38 Guinness World Records broken including things like ‘fastest time while dressed as an awareness ribbon’ (2:36:52) and ‘fastest time while dressed as a tent’ (3:57:05). You can see a full list of the weird records broken here but not before you watch this dude get clipped at the finish line.

While you’re watching this I want you to take notice of the guy dressed as Big Ben getting cockblocked by his costume at the finish but also keep your eyes peeled for the dude who runs by with a shirt covered in blood because his nipples bled out like Andy Bernard on The Office.

This is not what you need after 26.2 miles. pic.twitter.com/ZkmJftX0Hv

Did you catch the bloody nipple guy? If not, here are a few tweets to really emphasize how f’n crazy marathon runners are for doing this to their bodies.

I do feel more sorry for poor John 😬 pic.twitter.com/lHZrr274gt

John, my dude, please load up on vaseline or bandages before the next marathon. And consider training in the apparel/gear that you’ll be wearing during the race. This seems like a classic situation where someone decided a vacation was the perfect time to break in new shoes and they’ve got extreme blisters within hours. Or I could be entirely misreading what went down here.

I feel like I’m harping on John the Bloody Nipple Bloke here but he somehow managed to steal the limelight from the guy in the Big Ben costume who couldn’t make it across the finish line without assistance because his costume was too tall.

As for the biggest winner of the day, Eliud Kipchoge won his 10th consecutive marathon and he became the first person to ever win the London Marathon four times. He finished with the 2nd fastest marathon time in history with 2:02:37, just barely behind his own world record of 2:01:39. For more on Eliud Kipchoge’s win, you can check out the Runners World recap.