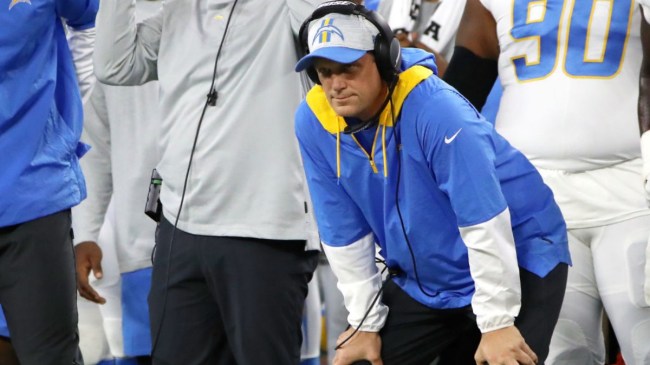 21 minutes into Saturday night’s game between the Los Angeles Chargers and Jacksonville Jaguars, it looked like Chargers fans should already be booking flights to Kansas City for the 2nd round of the playoffs.

Trevor Lawrence had already been intercepted 4 times and the Chargers led the game 27-0.

Then the Jaguars stormed back. They managed to score their first touchdown of the game with 24 seconds left in the first half to cut the lead to 20. In the 2nd half, they completely shut down the Chargers offense.

The visiting team only managed to post 3 points in the 2nd half thanks to a missed 40-yard field goal and an inability to effectively run the ball while trying to hold onto the lead.

Meanwhile, the Jaguars scored 24 in the second half to pull off the 3rd biggest comeback in NFL playoff history.

Following the devastating loss, there were expected to be some repercussions for the Chargers’ coaching staff. Many believed that would be the firing of Brandon Staley, whose decision-making has come into question in each of his first 2 seasons as the team’s head coach and with the team suffering disappointing ends to each season.

That may not end up being the case as the Chargers have chosen to fire a different coach today. According to ESPN’s Dianna Russini, the team has fired offensive coordinator Joe Lombardi.

The Chargers have fire offensive coordinator Joe Lombardi, per sources

Despite the 30 points they put on the board on Saturday, the offense should shoulder a lot of the blame for this loss. Their point total was definitely helped by great field position gifted to them by the defense. They also struggled to sustain drives as the team tried to close out the game.

The offense had been pretty average throughout the season just a year after Justin Herbert was an MVP candidate.

It looks like this loss was the last straw for the offense and now the Chargers actually will be looking to replace at least one coach this offseason.